The Louis Leonowens House in Lampang

The Louis Leonowens House is the former residence of Louis T. Leonowens and office of the Louis T.Leonowens company. “Baan Louis”, as it is known locally, is in the “forestry” neighbourhood of Lampang. The location is not far from the Wang River and the iconic Rachadapisek Bridge. Louis (1856-1919) was the son of Anna Leonowens. She was the British tutor to the children of the King Mongkut (Rama IV).

Anna became famous through the musical and movie The King and I. From 1884 onwards Louis involved himself in the teak trade. He worked for the British Borneo Company and the Bombay Burmah Trading Corporation.

Louis himself is known as a colourful character. He spoke fluent Thai. People have described him as being and behaving like a Thai person. Louis grew up with King Rama V, Chulalongkorn. He was also one of the founding members of the Gymkhana Sports Club in Chiang Mai. You can read more about the life of Louis here.

In 1905 Louis founded his own company: the Louis T.Leonowens Company. At that time construction started on the Louis House. It became the office of the company. Louis lived there until he sold the company. Staff were stationed in Raheng (Tak), Paknampo (Nakhon Sawan), Sukhotai and Sawankalok. The head office was in London, the country office in Bangkok. The Leonowens Company is still active today as a trading company. Apart from teak logging, the company also became an agent for imported whisky. It even has an office in Bangkok.

painters in front of the Louis House

Louis goes back to the UK

Louis returned to the UK in 1913. He passed away in 1919 during the global influenza pandemic. He is grave is at the Brompton Cemetery, London. It took me a long time to find the grave because the website of the cemetery gives the wrong location of the grave. It is a vast cemetery with more than 35000 gravestones. I had to do a lot of walking, which was a pleasure though. It is a beautiful place with lots of squirrels, amazing trees and a great atmosphere. His second wife Reta May Leonowens is buried there as well. She passed away in 1936.

Grave of Louis Leonowens in London

The Leonowens company was smaller than its main competitors, the Borneo Company and the Bombay Burmah Trading Corporation. We have visited the house several times in the past few years. There has been an event a couple of years ago.  There are indications that the Forestry Department that owns the house has plans to make repairs to the house. It would be great if the house could become a museum on the history of the teak industry in Lampang.The latest news is that renovation of the Louis House has begun. We will keep you updated.

The Louis House features in these programs: 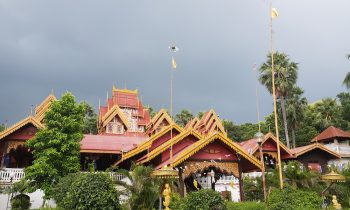