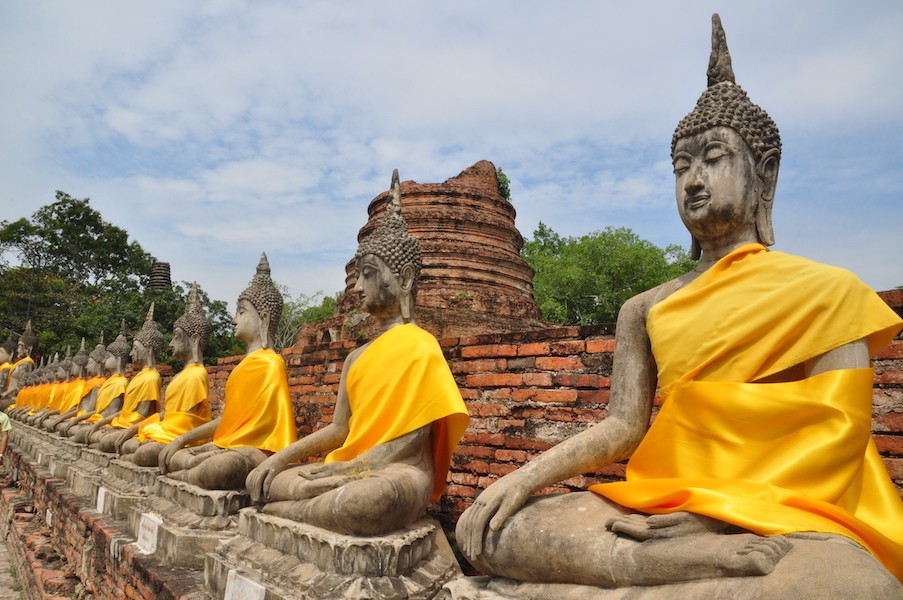 Chiang Mai would become the sixth World Heritage Site in Thailand. The Dong Phayayen-Khao Yai Forest Complex was the last to be inscribed in 2005.

Since 2015 Chiang Mai is on the list of Tentative World Heritage Sites of UNESCO. A team in Chiang Mai is working on the dossier that ultimately should succeed in convincing UNESCO to add Chiang Mai to the list of World Heritage Sites. There are six other sites in Thailand on the tentative list. Although it had nothing to do with UNESCO it is nice to look back at the first plan for historic and environmental preservation. This dates back to 1991.

Consultants of the Chiang Mai Planning Project, Louis Berger International Inc. and the Faculty of Engineering – Chiang Mai University prepared a document titled: Chiang Mai Policy-Based Action Plan for historic and environmental preservation. This final report is dedicated to Dr.Pairat Decharin, the former Governor of Chiang Mai. He was one of the primary sponsors of the Chiang Mai Planning Project. Dr.Decharin, his wife Supap and probably their only child Pasu died in the crash of the plane of Lauda Air on May 27 1991. 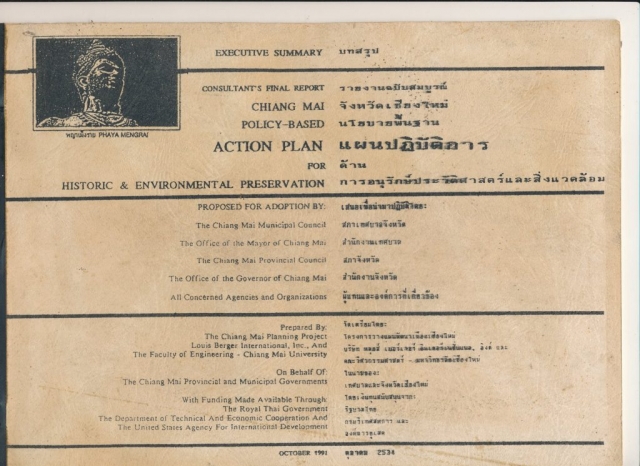 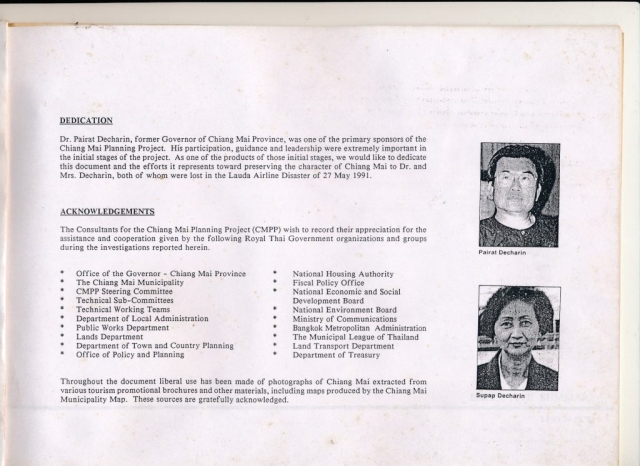 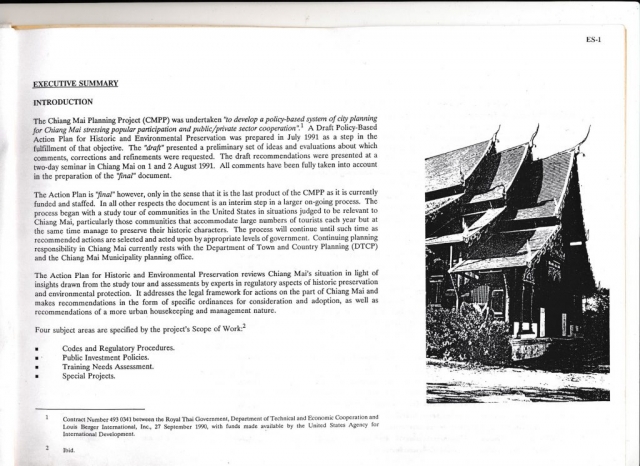 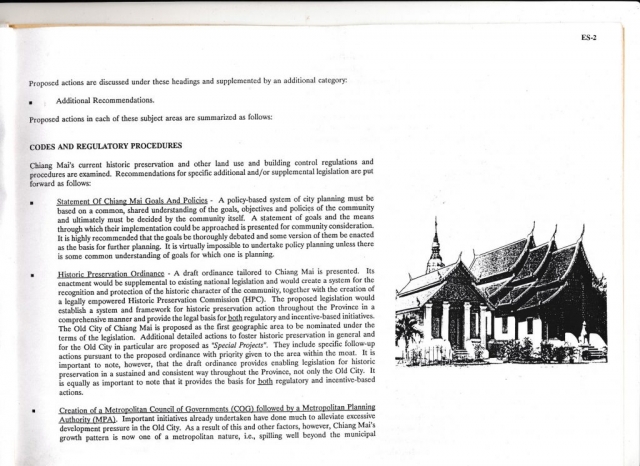 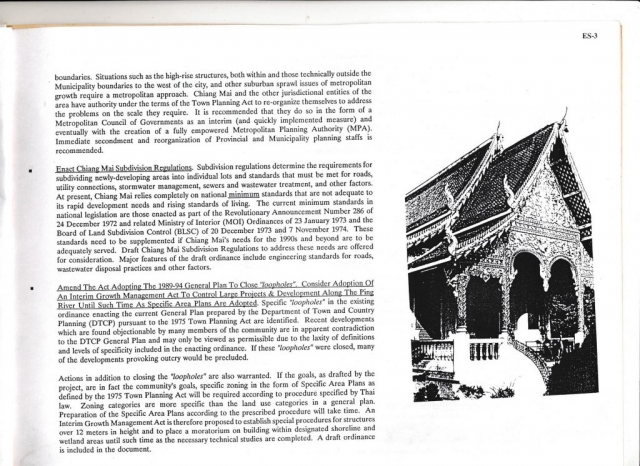 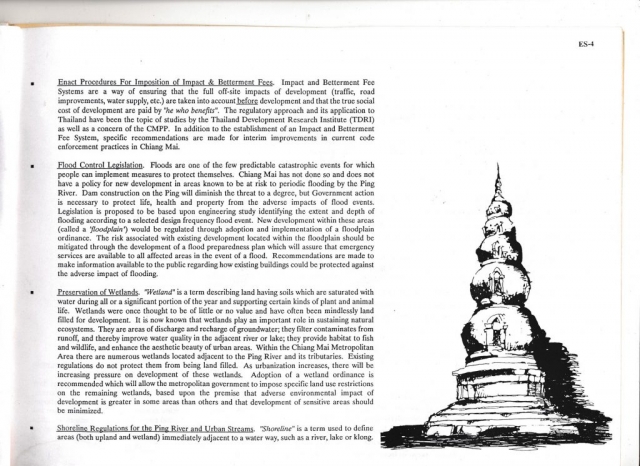 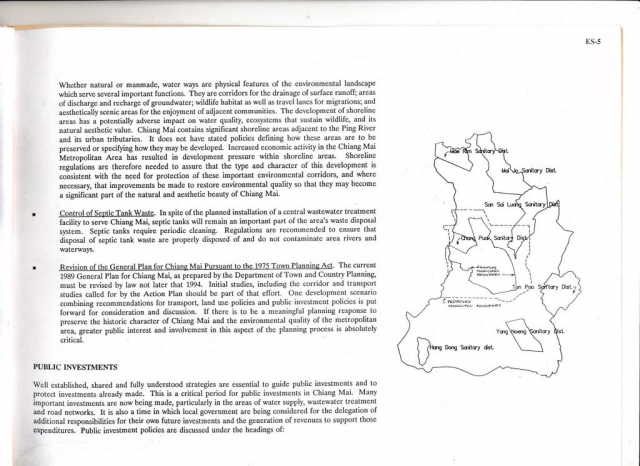 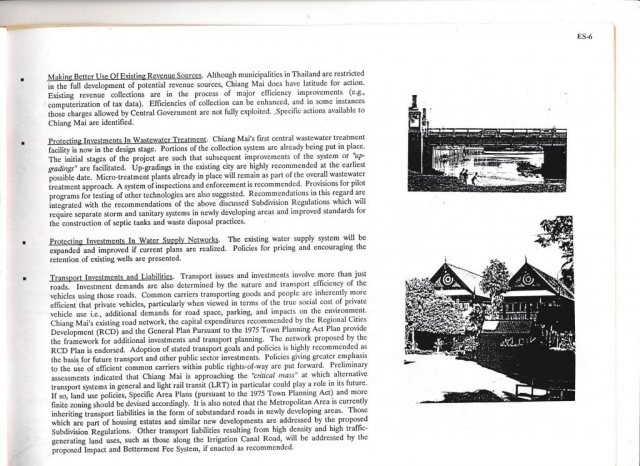 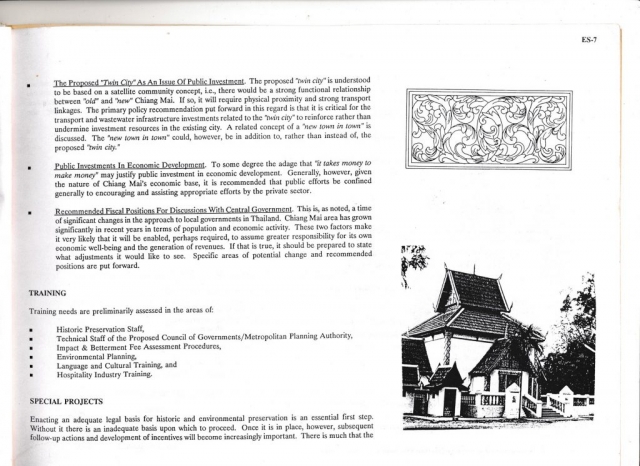 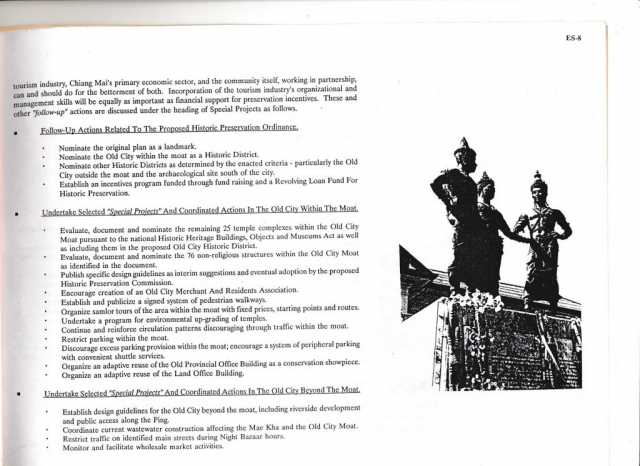 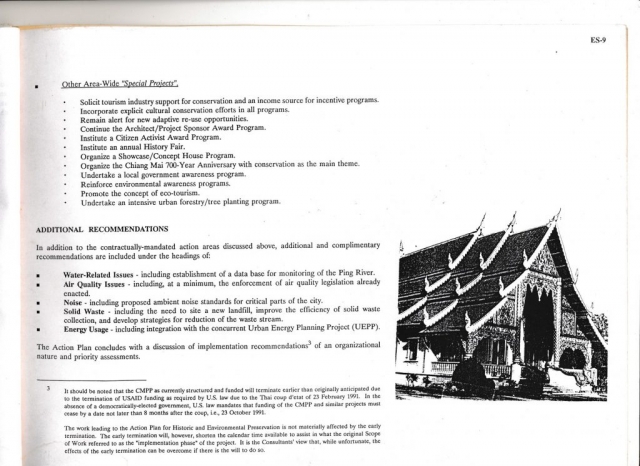 Failure of the action plan

It appears that this action plan came to nothing after Dr.Decharin’s passing. The US Consul General Charles S.Ahlgren (1987-1989) wrote this when he was about to leave Chiang Mai: “Among the Thais, I have especially warm memories of the governor, Pairat Decharin, and his family. I was terribly saddened to hear of his death, and that of his lovely wife, in the 1991 Lauda plane crash. That accident not only took their lives and that of many of Chiang Mai’s leaders but dealt a blow to many development and planning activities in the town.”
The action plan mentions a number of things that still could be done such as continue and reinforce circulation patterns discouraging through traffic within the moat, restrict parking within the moat and establish and publicise a signed system of pedestrian walkways, just to name a few. The plan also mentions “Organise samlor tours of the area within the moat with fixed prices, starting points and routes”. We already do this but it has to be organised and promoted much better. Please check out the Chiang Mai on Three Wheels website.

In July 2013 Chiang Mai University’s Faculty of Fine Art organised two seminars on the project to push for Chiang Mai and Lamphun to be one UNESCO World Heritage Site. One seminar took place at Chiang Mai University, the other at the National Museum in Lamphun. We attended the latter and were rewarded with a t-shirt. The idea was that Chiang Mai and Lamphun complemented each other. Chiang Mai is the global tourist destination as Lamphun is rich in history and culture. After this, we lost track of the World Heritage Project until early 2020. Some time along the way Lamphun was dropped at twin city: Chiang Mai is going for it alone.

They must complete the dossier which is far from complete and will take months more work to complete. The dossier focuses on historical sites in Doi Suthep-Doi Pui National Park, in the Old City and in buffer areas around the park and the old city. The map below shows the main zone (property) in orange and the buffer zone in green. There are four groups of so-called attributes. You can find more information about the attributes here. 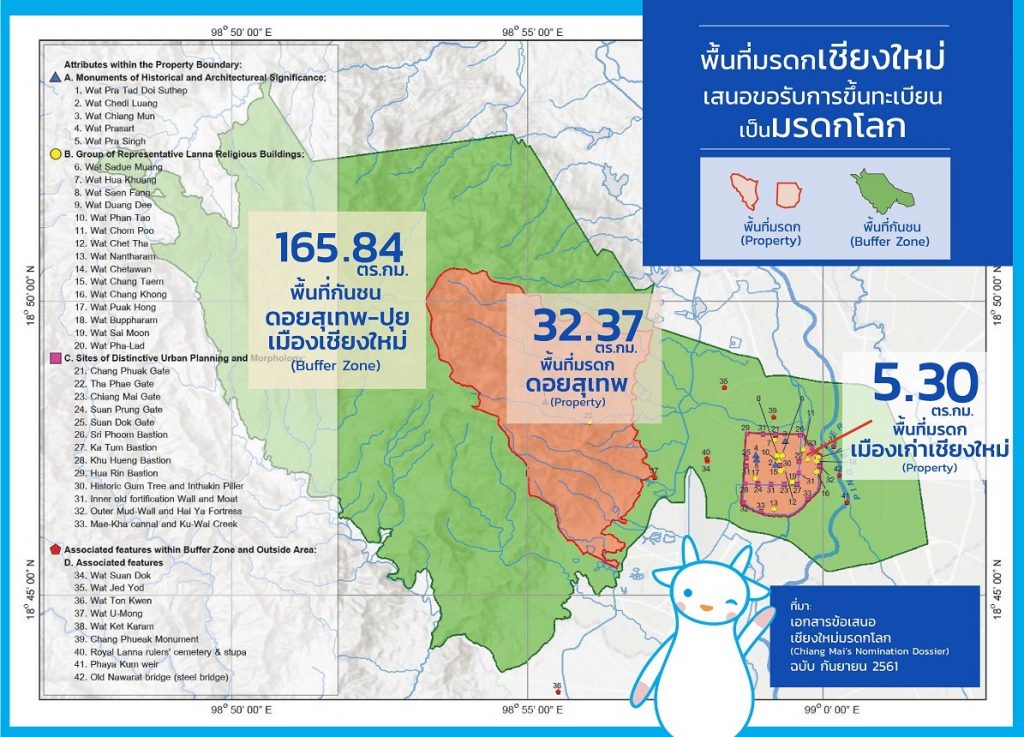 The various levels of the Chiang Mai municipal and provincial government must then endorse the draft dossier and forward it to the Ministry of Culture. This Ministry may wish to edit or amend the draft nomination dossier.  When they are satisfied with it, the Ministry will endorse the nomination to the Thailand National World Heritage Committee. The Deputy Prime Minister chairs this committee. It will then officially submit it through the Thailand National Commission for UNESCO to the World Heritage Centre. The next deadline for submissions is 1 February 2021.

International Council on Monuments and Sites

Once officially submitted the UNESCO World Heritage Centre will perform a “completeness check” to ensure that all required parts of the nomination are included.  Once the nomination is certified as “complete,” they will forward the dossier to ICOMOS (International Council on Monuments and Sites). This is the officially designated “advisory body” responsible to evaluate all nominations made under cultural heritage criteria. There is another “advisory body” that is responsible to evaluate all nominations made under natural heritage criteria. This is the IUCN, the World Conservation Union. In the case of Chiang Mai, the IUCN will not be involved.

The evaluation process is in two parts.  First, there is a desk review by a number of ICOMOS experts in the field.  While a minimum number of experts are invited to submit evaluations, in fact, at this stage in the process any member of ICOMOS may submit an expert evaluation of the nomination dossier.  This first stage desk review focuses on the criteria and attributes of potential outstanding universal value for which the property has been nominated.  It does not concern management issues.

If the desk review is positive, the nomination is then subject to a second stage evaluation which consists of an on-site inspection and evaluation of (primarily) management issues.  ICOMOS will appoint one or more experts to come to Thailand. They will work together with the Thailand National World Heritage Committee, the Ministry of Culture, local government officials, and the nomination drafting team. Together they will examine the management system in place to protect the nominated property’s potential outstanding universal value.  As part of this process, the evaluation team will hold public consultations with various stakeholder groups. 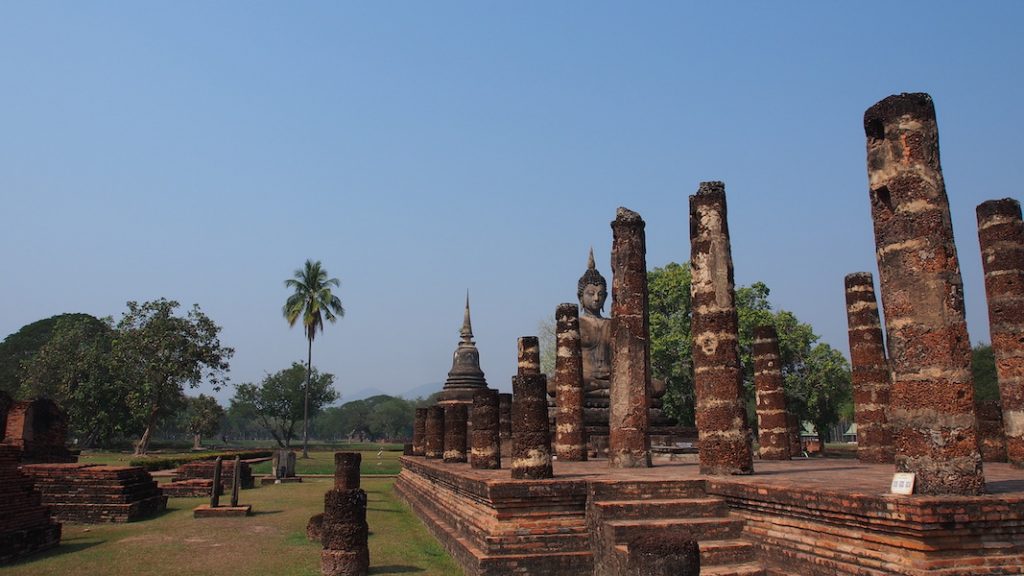 Meeting of the World Heritage Committee

The World Heritage Committee meets once a year in July.  If the Chiang Mai nomination is officially submitted by 1 February 2021, the World Heritage Committee will consider the nomination at its meeting in July 2022. Due to the Corona crisis, there is serious doubt that the local committee will be able to finish the dossier in time to submit it in time. After finalizing the dossier it has to be approved by municipal, provincial and national bodies.

The Commitment of Chiang Mai a la Carte

Chiang Mai a la Carte and our mother brand Green Trails are committed to contribute to the preservation of The Heritage of Chiang Mai and North Thailand. We actively promote the Living Heritage of Chiang Mai. We fear that the Covid-19 crisis also has had an effect on the Chiang Mai nomination.
Green Trails actively promotes the preservation of the traditions and textiles of the tribal groups of North Thailand.
We will keep you updated.