Things to do in Lamphun

The Wat Phrathat Hariphunchai is, without a doubt, the best-known attraction of Lamphun. There is no other place in this charming town that attracts so many visitors as this magnificent temple. It is the spiritual centre of Lamphun. Many events, such as the Salak Yom Festival, take place here. Wat Prathat Hariphunchai features in quite a few of our tours such as the Explore Authentic Lamphun and Wiang Kum Kam tour and the Visit Doi Inthanon and Ancient Lanna Cities tour.

This is a significant temple on the road from Lamphun to San Patong. Wat Chamathewi (sometimes spelt Chamadevi) or Wat Kukut is famous for its Mon Dvaravati style chedi, similar to Wat Chedi Liam in Chiang Mai. The Mahabol Chedi aka the Suwan Chang Kot chedi is a stepped pyramid chedi with niches that contain images of the standing Buddha. At the back of the temple, compounds is a small museum dedicated to Kruba Srivichai, the patron saint of North Thailand. 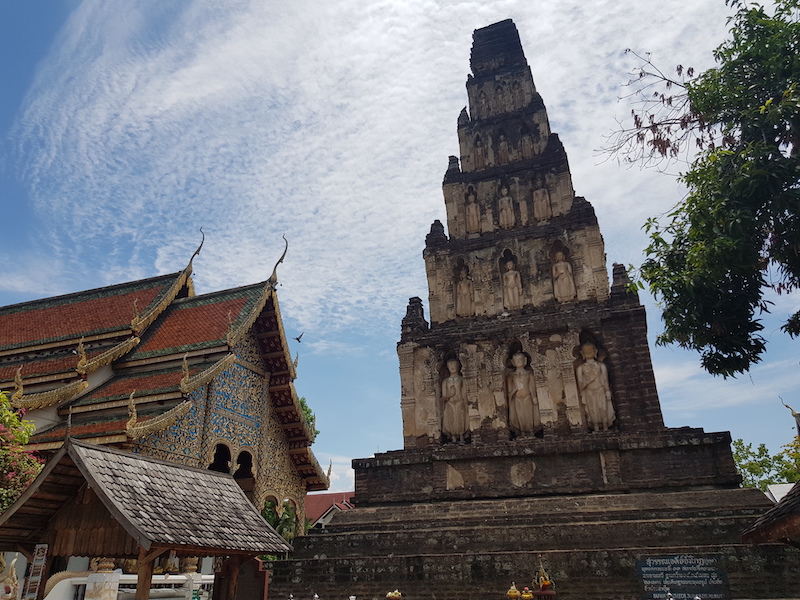 This temple is not far from Wat Hariphunchai. Wat Phra Yuen dates back from around 1370 and was constructed on the site of a standing Buddha. The temple is located within a walled compound with towering palm trees. It is our favourite temple in Lamphun.

Kruba Srivichai (1878-1939) was a Buddhist monk. His name is sometimes spelt as Khruba Siwichai. Anyway, he is the most revered monk in North Thailand. He initiated the renovation of many temples in the north. His followers constructed the road to Wat Doi Suthep in 1935. There are many statues of this monk all over North Thailand. The huge statue at Wat Doi Ti, Lamphun, is just one of them.

The Lamphun Community museum is located just behind the national museum. It is an interesting museum in a beautiful house. It exhibits all kinds of things such as bicycles, household utensils, old pictures, and so on. The museum offers a lot of information about old houses and architecture in Lamphun

The covered bridge over the Mae Khuang (Khuang River) opposite the Wat Hariphunchai houses a lovely “OTOP” market. OTOP is an abbreviation of One Tambon One Product, a project of the former Prime Minister Thaksin Shinawatra. A Tambon is a district. In short Thaksin wanted every district to specialize in producing one specific product. There are a lot of those local products for sale here. It is a great market and we highly recommend it.

The Tai Yong are in fact Tai Lue people who migrated from Muang Yong in Northern Shan State (now Myanmar) to the Lamphun area around 200 years ago. Most of the people living in the area are descendants of the Tai Yong. The museum showcases beautiful Tai Yong traditional dress and other exhibits. If you cross the Mae Khuang River by the covered bridge that houses the OTOP market, you will bump into this small museum on the left-hand side. It is on the compound of Wat Ton Kwaen.

The Chiang Mai Doll Making Centre and Museum is actually in San Patong district but we include it here because it is only about 10km from Lamphun town. We think this marvellous museum is one of the most “undervisited” museums in North Thailand. Apart from showcasing thousands of dolls from all over the world it also has a small factory where beautiful dolls are being handcrafted. Highly recommended!

Here you can read more about the Chiang Mai Doll Making Centre and Museum. 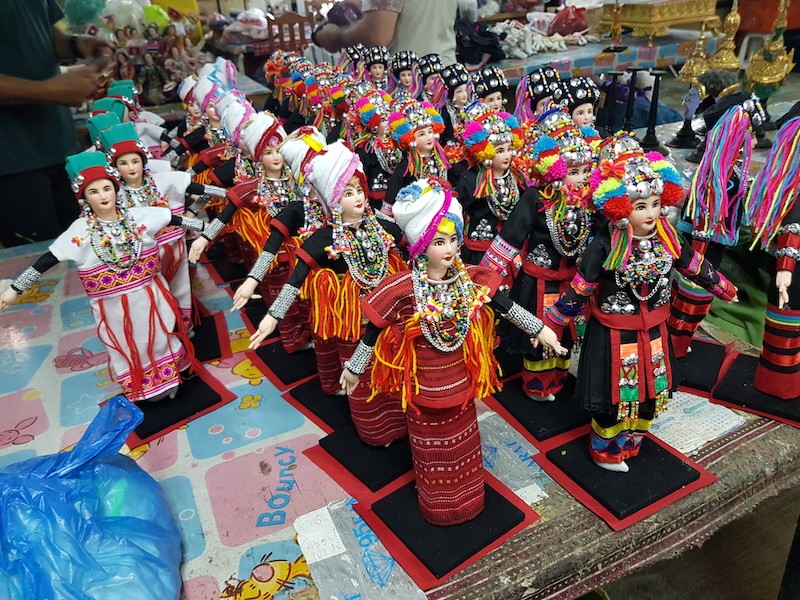 Lamphun predates Chiang Mai by at least 500 years. It was the capital of the Mon Dvaravati Kingdom Hariphunchai. Lamphun’s wall and moat are oval-shaped as opposed to Chiang Mai which has rectangular shape. Parts of the old city walls have been restored. 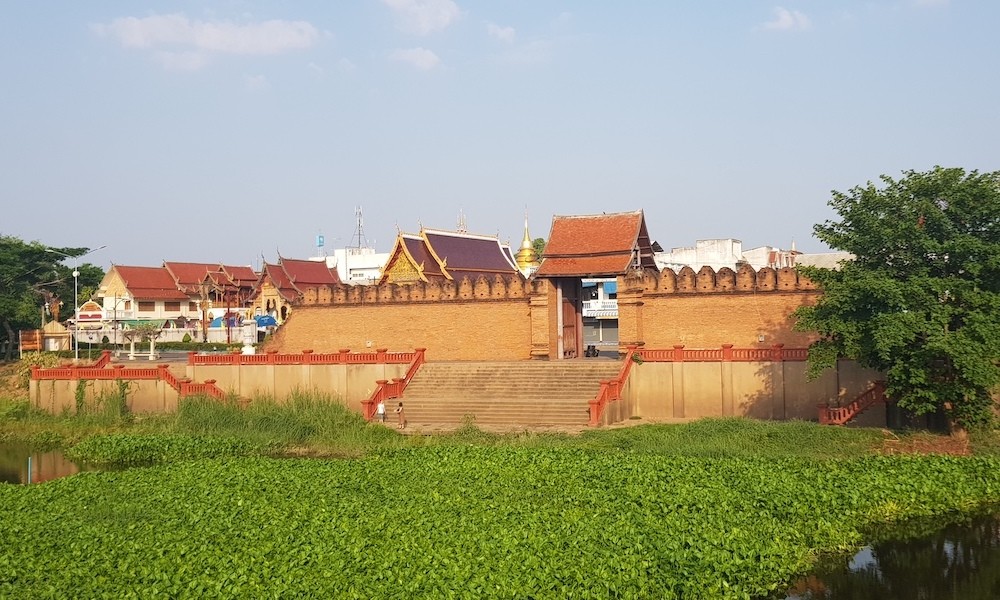 This is an extraordinary temple, about 14 km south of Lamphun. There are actually two temples, one on the ground level and another on a hilltop. It is really worth spending some time here. You can walk up to the temple on the hill which is called Phrathat Chedi Si Khruba. From the temple, you have a commanding view of the countryside. If you are not willing to walk, there is a road leading to the top of the hill, just behind the temple. We think that Wat Phra Phutthabat Tak Pha is worth visiting. Your guide will tell you the story behind this temple. 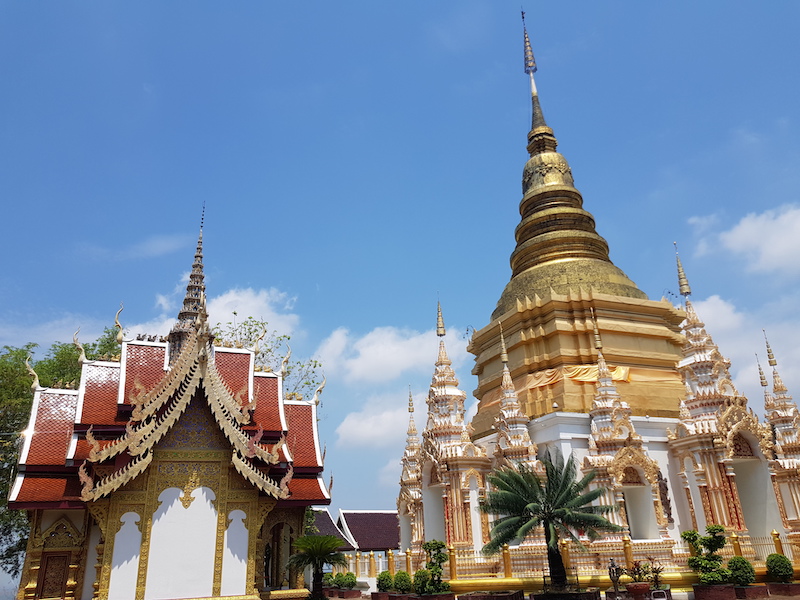 These seldom-visited ruins are about 20km from Pasang which is just north of Lamphun. There are several ruins such as a mondop in a pond and a chedi. The complex is well maintained and there is even a small museum. For those who are interested in archaeology Wat Koh Klang is worth a visit.