Things to do in Lampang

Lampang is a major city about 90 km south of Chiang Mai. At the location of Lampang a settlement called Wiang Khelang was founded in about the ninth century during the time of Queen Chamathewi. Therefore the city predates Chiang Mai. Little is known about the early history of Lampang. Over time the city became known as Nakhon, Lakhon and, finally, Lampang. It was an independent kingdom until King Mengrai conquered it. King Mengrai, the founder of Chiang Mai, and his successors laid the foundation of Lan Na between 1296 and 1355, which comprised Chiang Mai, Chiang Rai, Lamphun and Lampang.

The Golden Age of the Lanna Kingdom

Historians consider the period from 1355 until 1558 kind of the Golden Age of the Lanna kingdom. Temples such as Wat Suandok, Wat Yet Yod and Wat Chedi Luang date back to that period. The Lanna kings conquered Nan and Phrae but were also waging war on Sukhotai, Ayuthaya. They conquered faraway places such as Chiang Rung (currently Jinghong in Yunnan province, China) and Muang Yong and other towns in Shan State (now in Myanmar). During this time, Khelang (Lampang) was part of the Lanna Kingdom.

Continuous warfare had weakened Lanna. In 1558 Burmese armies conquered Chiang Mai which was the beginning of the Burmese occupation. This period lasted from 1558 until 1774. Not much is known about this period. At times the Lanna Kingdom was semi-autonomous. During periods the ruler was Burmese, sometimes the ruler was a descendant of the Mengrai dynasty. In 1614 Lampang declared independence. It was a fluid period with many revolts against the Burmese occupation.

The Revival of the Lanna Kingdom

In 1774 a local noble called Kawila succeeded in driving the Burmese out of Chiang Mai with the help of Taksin, king of a Siamese kingdom based in Thonburi. Kawila became the first king of the Chet Ton dynasty and started the revival of the Lanna Kingdom. Lanna was by now a vassal of Siam. The kingdom was in ruins. Kawila’s rebuilding policy is usually described as “Put vegetables into baskets, put people into towns.”

There are many stunning Buddhist temples in Lampang. The most popular are Wat Prathat Lampang Luang, Wat Phrakaew Don Tao and Wat Pong Sanuk. If you are really interested in temple architecture Lampang is worth spending a bit more time. We recommend at least one overnight.

Wat Prathat Lampang Luang is one of the most highly revered temples in Thailand, about 20 km north of Lampang. The chedi contains a relic of the Buddha who visit the site about 2500 years ago. Wat Prathat Lampang Luang is a wiang, a fortified settlement on a small hill. Its walls are imposing. The temple dates back to the 13th century. It is a great example of Lanna style temple architecture. It is the must-see temple that features in our two-day Classic Lampang Railway Journey. 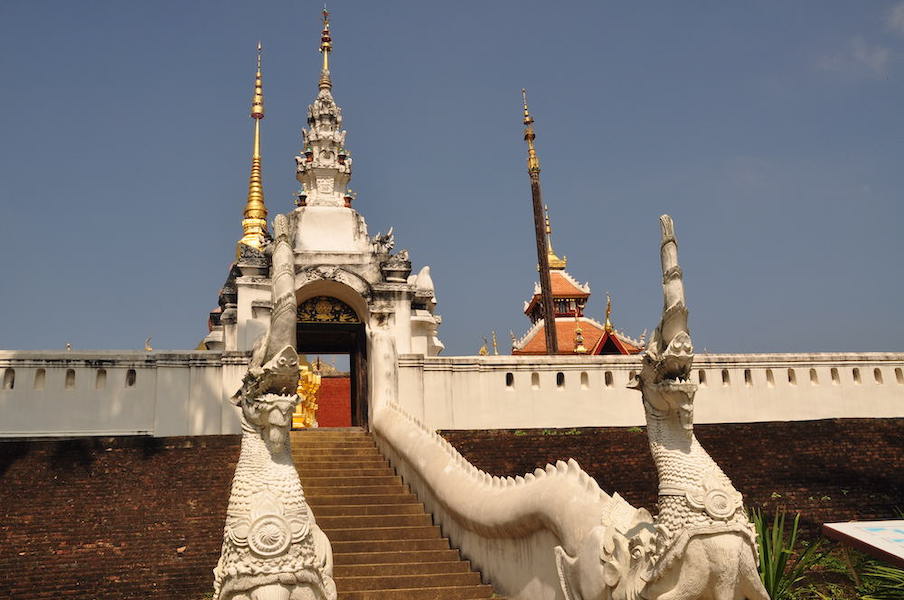 This temple is the most revered of all temples of Lampang. It is not far from the Wang River.  Wat Phra Kaew Don Tao dates back to the 14th or the 15th century. This temple housed the Emerald Buddha statue for 34 years in the 15th century. This highly revered statue was discovered in Chiang Rai and then moved to Lampang. It is now in Wat Phra Kaew in Bangkok.

This temple is not far from the Wang River. Wealthy Burmese residents constructed this temple in 1886 in Shan and Burmese style. At that time the temple was called Wat Pong Sanuk Tai. The Wihan of this temple has a unique cruciform shape. Just recently this Wihan has been restored as it was in terrible shape. The restoration started in 2004 and completed in 2008. It was a joint effort by the local community, experts from Chiang Mai University, sponsors and UNESCO. The project received the Award of Merit, a UNESCO award for cultural heritage conservation. 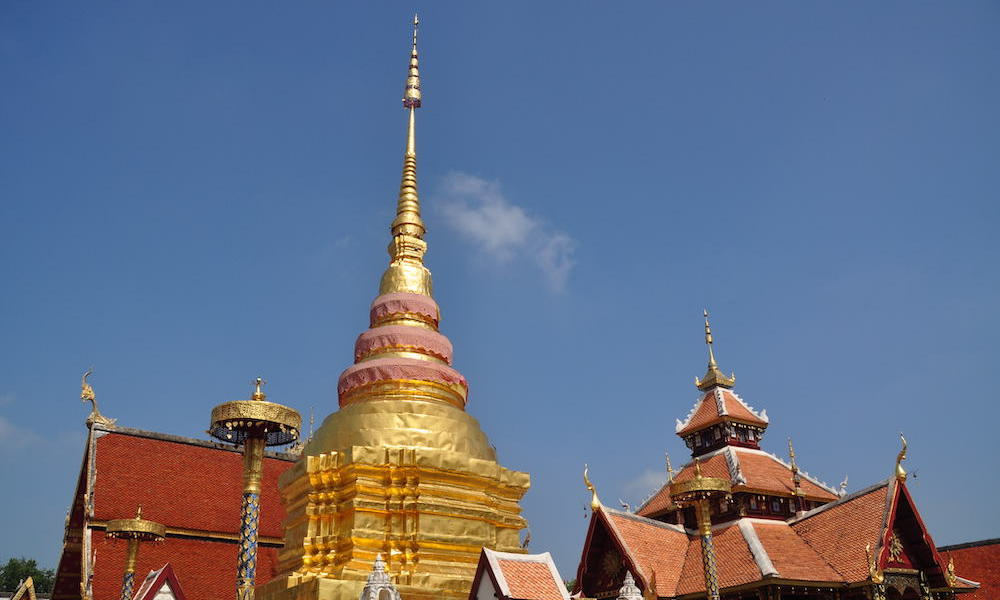 Wealthy Burmese constructed this temple in 1904. Lampang (called Lakon in those days) was for decades the center of the teak logging industry in North Thailand. Many Burmese and Shan people worked for the British teak companies such as the Borneo Company and the Bombay Burmah Trading Corporation. They constructed temples in their own styles such as this temple. The Buddha statue is called Bua Khem. It sits aloft a structure of nine tiers, a typical feature of Burmese design. Wat Si Rong Muang is one of our favourite temples in Lampang. 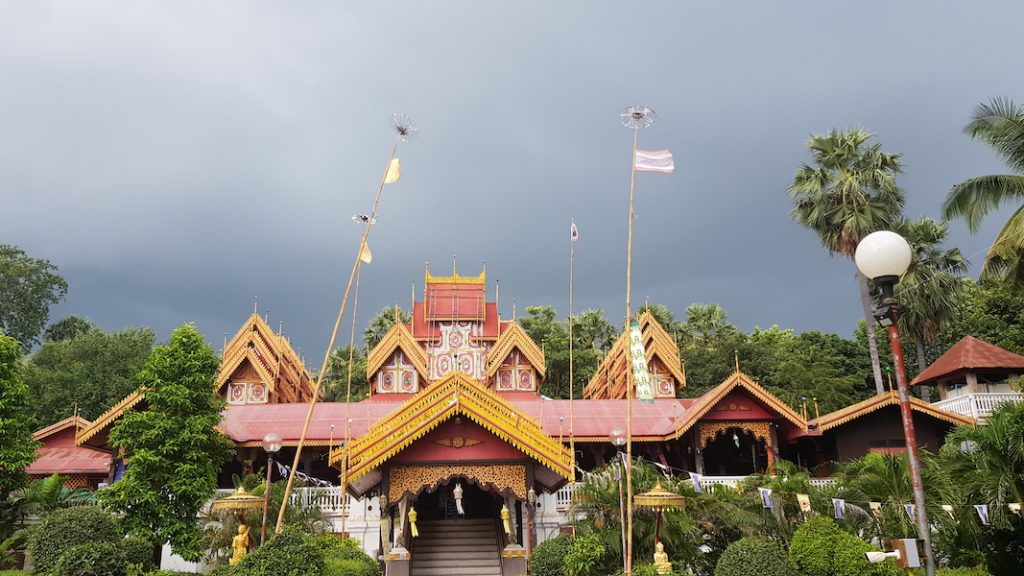 People consider this temple the most beautiful Burmese-style temple in Thailand. A Burmese teak trader by the name of Kyuang Taka U Yo and his stepson U Maung Gyi constructed the temple in 1890. In 1906 a relic from the Buddha arrived from Burma. The Fine Arts Department declared Wat Sri Chum a national historic site in 1981. The temple has underwent renovation recently.

This seldom visited temple is on the Wang River, right behind the Kad Kong Ta Street, the street with many heritage house. Apparently Wat Koh Walukaram was constructed centuries ago on an island in the Wang River. Notable of this temple is the beautiful teakwooden viharn that features in the BBC series “Great Asian Railway Journeys“. 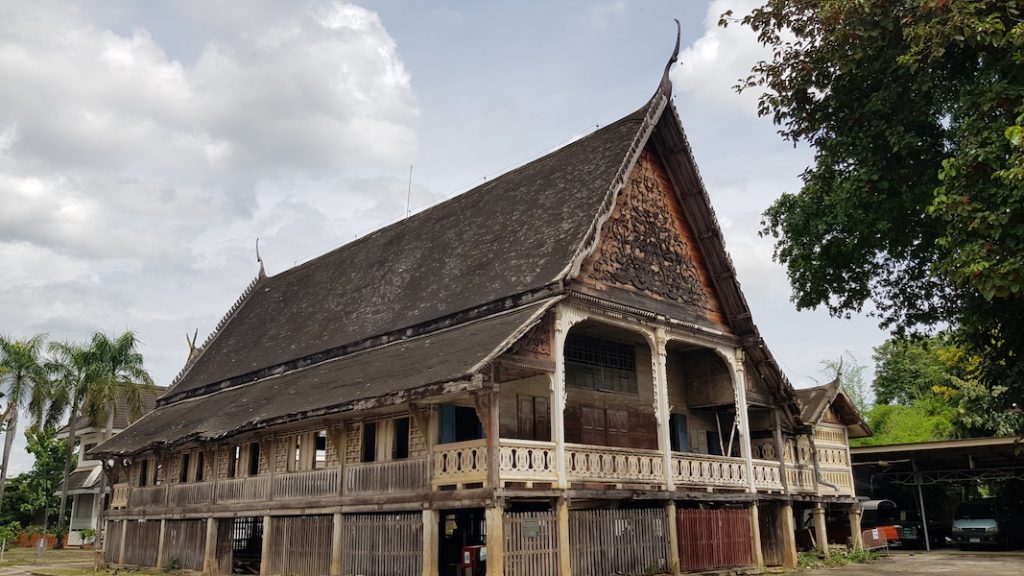 This is one of the lesser visited temples in Lampang but nonetheless a very interesting and unique one. Wat Chedi Sao Lang is about 1,5 km outside the city. The name translates as the temple of the twenty stupas or chedis. The story goes that two monks came from India to spread the teachings of Buddha long time ago. A local ruler was so impressed with them that he asked each of them to give ten pieces of hair. He put each hair in a stupa. This is the legend behind Wat Chedi Sao Lang. 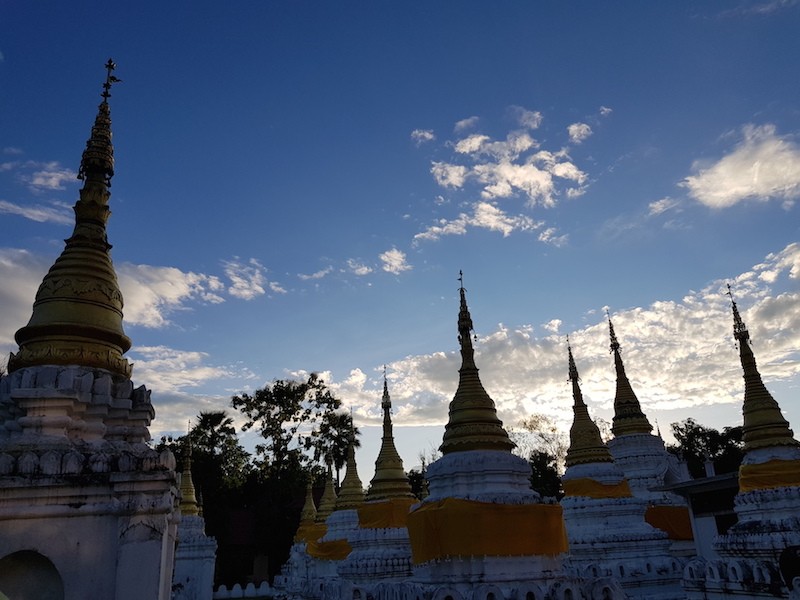 Make a horsecart ride in Lampang

Lampang is the city of horse carts. It is the only city in Thailand that still has a significant number of horse carts. They were introduced more than 100 years ago when the city had a sizeable amount of Burmese and Shan Inhabitants. So one of the things to do in Lampang is to take a ride in a horse cart. It is good fun.

Great Things to see in Lampang

The Rachadapisek Bridge is an iconic bridge that spans the Wang River. An American missionary teacher saved the bridge from destruction in World War Two. You can read the story here. It is a narrow bridge. After dark, this bridge is beautifully illuminated.

There are more teak wooden houses in Lampang than in any other city in northern Thailand. The city was a major centre of the teak industry from the 1880s until 1941. Many of these houses were constructed in this period. A good example is the former office of the Louis T.Leonowens Company, one of the British logging companies, but there are many others. At the time of writing, you can visit this house. There is no entrance fee. The house is empty but might be transformed into a museum in the future. Let’s hope so.

The Lampang Railway Station is one of the most beautiful railway stations in Thailand. The railway from Bangkok reached the city in 1916. The train ride from Chiang Mai to Lampang is a very scenic one. Take the day train so you can enjoy the ride that takes you through Khuntan Tunnel and Khuntan National Park. It is a third-class train without airconditioning that allows you to feel the wind and experience the old train stations and the scenery.

This museum is well worth a visit. It tells the story of the history of the Dhanabadee Ceramic company and its trademark the “Chicken Bowl”. It is an educational and fun museum. They organise workshops and have some cute souvenirs for sale. 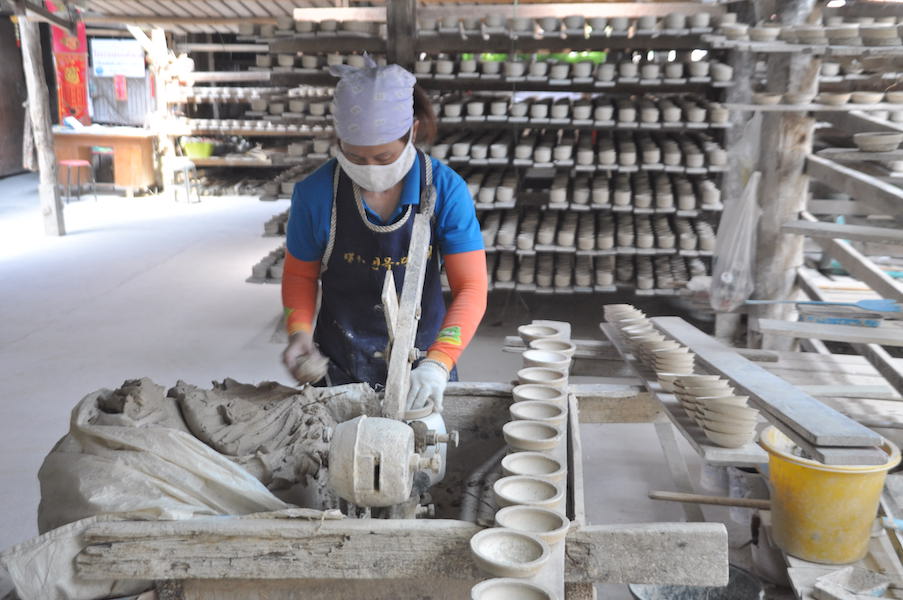 Just like many cities and towns nowadays, Lampang also has “walking streets”, early evening street markets that have local products for sale. There is one on Friday at Wang Nua street and one on Saturday and Sunday at Kad Kong Ta. Products for sale include souvenirs, handicrafts, delicacies and local food. Most of these street markets also offer foot massage and local music. Highly recommended. The Lampang Walking Streets are amazing. These markets usually start at around sunset and last until about 2200.

More than 100 years ago Lampang (called Lakon in those days) was the major centre of the teak logging industry. The Bombay Burmah Trading Corporation had been involved in teak logging in Burma before they moved to Siam. They brought with them many experienced Burmese and Shan (Tai Yai) employees and merchants. One of those Burmese was Maung Chan Ong. In 1895 he constructed Ban Sao Nak. “Nak” is northern Thai for “many”. Ban Sao Nak means house with many pillars. The house is an outstanding example of Burmese influenced Lanna architecture. It now houses a museum.

This is a beautiful house dating back from 1925. Ban Pong Nak is on the compound of Fort Surasakmontri. Local government constructed the house. During his visit to Lampang in 1927, King Prajadiphok, Rama VII, stayed in this house with Queen Rambai Barni.

“Pong” means “window” in Northern Thai; “Nak” means “many”. Ban Pong Nak means House with many windows. It is now a museum that exhibits some personal belongings of Rama VII. There are also World War Two weapons on display. 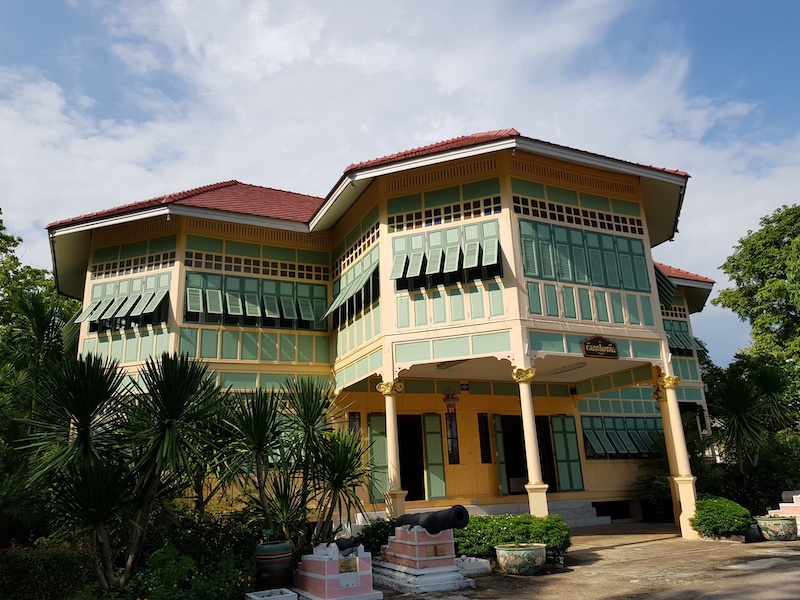 Things to do in Lampang Province

Lampang is a huge province, the 10th biggest of the 76 provinces in Thailand. From the southernmost point to the northernmost point is a distance of more than 300km. We have separated the things to do section in Things to do in Nakhon Lampang or Lampang City and the province Lampang.

The Thai Elephant Conservation Center is located about 20 km north of Lampang. It is the only government-run elephant camp in Thailand. The camp itself offers an elephant show and allows elephant riding, both in which we are not very interested. We recommend visiting the hospital, which is part of the Center but has a separate entrance. The hospital offers free healthcare to all elephants. There is a nursery with mothers and their babies as well. 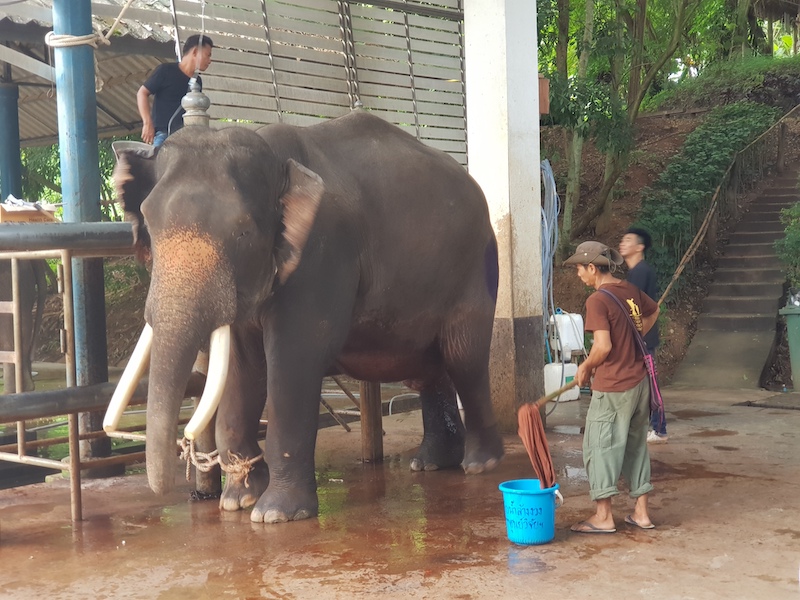 Doi Khun Tan National Park is about halfway between Chiang Mai and Lampang. It is one of Thailand’s oldest national parks and the only one that has a railway running through it. The highest mountain is Doi Khun Tan at 1373 meters. The park offers great hiking and many stories. The park offers good accommodation, and there are also old missionary bungalows. Doi Khuntan offers some fantastic views.

Make a train ride to Lampang

If you have the time, this is one of the great activities in Lampang. Take the slow day train which passes through Doi Khuntan National Park. The railway was constructed about 100 years ago and hasn’t changed much. The train will not run faster than 50kms per hour at any time. You will have plenty of time to enjoy the scenery and the small historical stations along the way. Highly recommended. 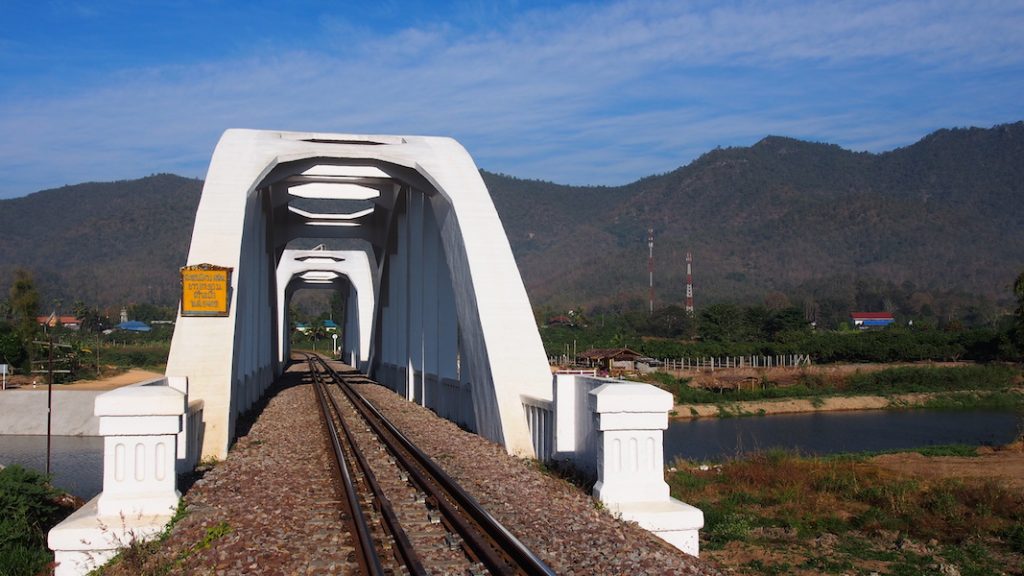 Hospital of the Friends of the Asian Elephant Foundation

Right next to Thai Elephant Conservation Center is the Hospital of the Friends of the Asian Elephant Foundation. This is a very nice place you should not miss. The two most famous residents are Motala and Mosha, two elephant who lost a leg after having stepped on a landmine. They both have a prostethic leg. 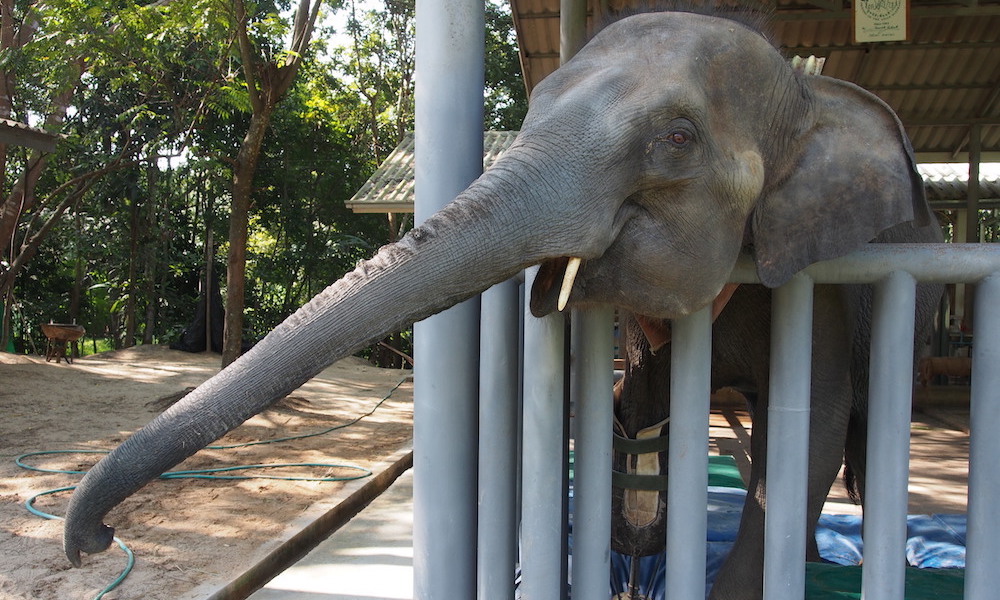