Origins of the Tai Lue people

The Tai Lue or Lue people are an ethnic group, living in China, Laos, Thailand, Myanmar and Vietnam. The name is also sometimes spelt as Tai Lü or Dai Lue. The Chinese knew them as Pa-Yi or Shui Pa-Yi, “water barbarians” but now they are called Dai.

They come from Xishuangbanna district in Yunnan province, China. This area used to be known as Sipsongpanna. It means Twelve (sipsong) township (pan) and rice fields (na). Eleven of these communities (Muang) are situated on the west bank of the Mekong River. The twelfth, Muang Sing, is located in west Laos. 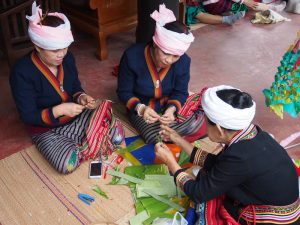 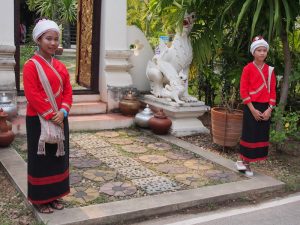 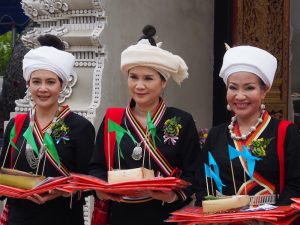 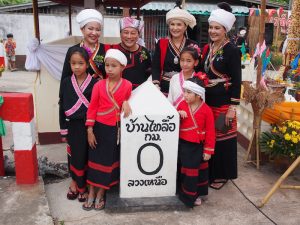 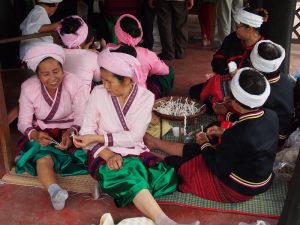 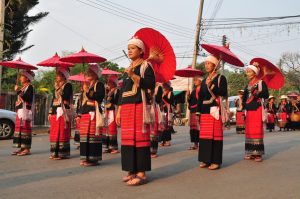 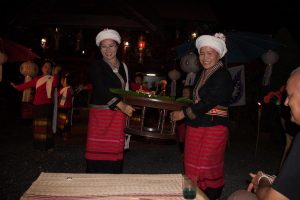 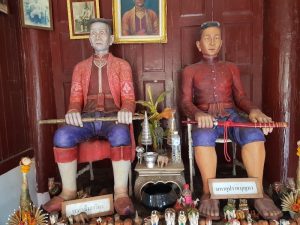 “Put vegetables into baskets, put people into towns” was the English rendition of Chiang Mai historian Kraisri Nimmanhaemin of the policy of King Kawila to repopulate parts of the Lanna Kingdom in the early 19th century.

Centuries of Burmese occupation of Chiang Mai and other parts of Lanna had ended late 18th century. In one of the versions of the Chiang Mai chronicle it says: ” At that time Chiang Mai was depopulated and had become a jungle overgrown by climbing plants, it turned into a place where rhinoceroses, elephants, tigers and bears were living. There were few people living in groups. Everything was overgrown leaving out the eaves of the houses and the roads to facilitate communication with each other, as there were no opportunities for clearing [the jungle].”

Kawila, a nobleman who had fought in the wars of liberation against the Burmese, became the first king of the Chet Ton dynasty. He ruled from 1782 until 1816. He fought wars against principalities in Sipsongpanna (Xishuangbanna, Yunnan) and Chiang Tung (Keng Tung, Myanmar) and forcibly moved thousands of people from those areas to repopulate Lanna. These were mostly Tai Yai, Tai Lue, Tai Yong (Tai Lue from a place called Muang Yong) and Tai Khoen. The last wave of Lue people entered Thailand from Laos after 1975, after the Pathet Lao (Lao communists) took over in Laos. 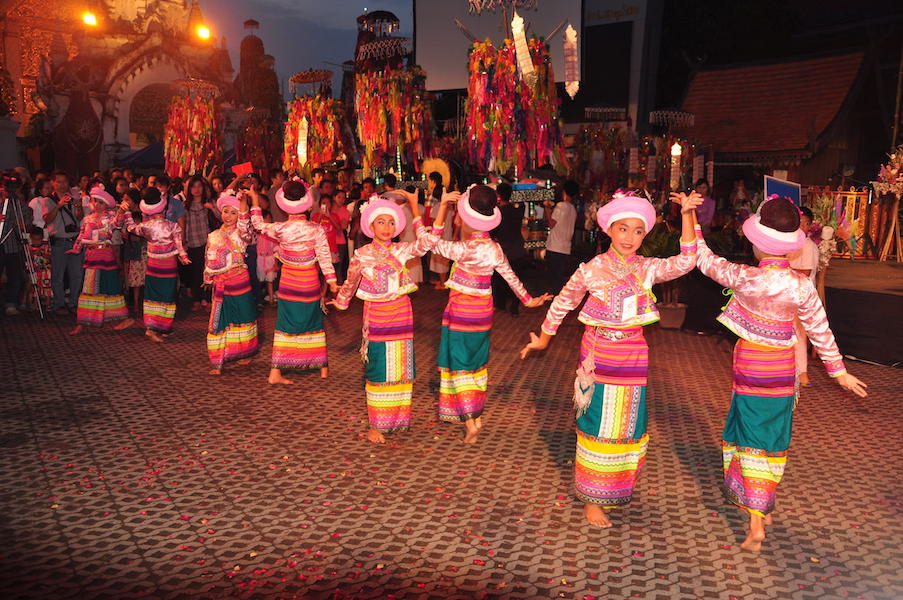 A new orthography was developed in the 1950s as a simplification of the traditional one. The new Lue orthography has eliminated redundant consonants and moved vowels and tone marks that were written above and below the line to be on one line. The Dai Lue-English dictionary of William Hanna uses the new orthography. I met William Hanna coincidentally at Payap University in 2012. He very graciously gave me a copy of his dictionary. The dictionary is now also online. 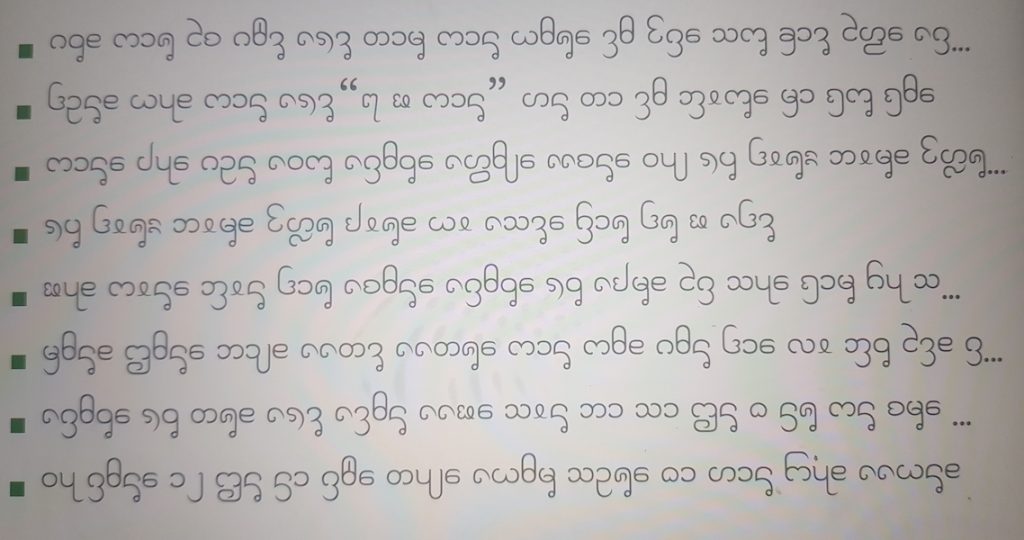 During a recent visit to Chiang Kham I went to Wat Yuan where the Tai Lue Cultural Center is located. A monk escorted me to the house of Ajaan (teacher) Sing Jai Wunglok, an 86-year old man who still is able to read, write and speak the old Tai Lue language. I showed Ajaan Sing the Dai Lue – English dictionary from William Hanna. After a quick look he told me he couldn’t read the new Tai Lue script. He showed me several of his Tai Lue writings after which I tried to write some of the letters myself. At several places in Chiang Kham I found Tai Lue language on signs and in texts but it was always the old orthography. I find the old orthography more interesting and beautiful than the new. 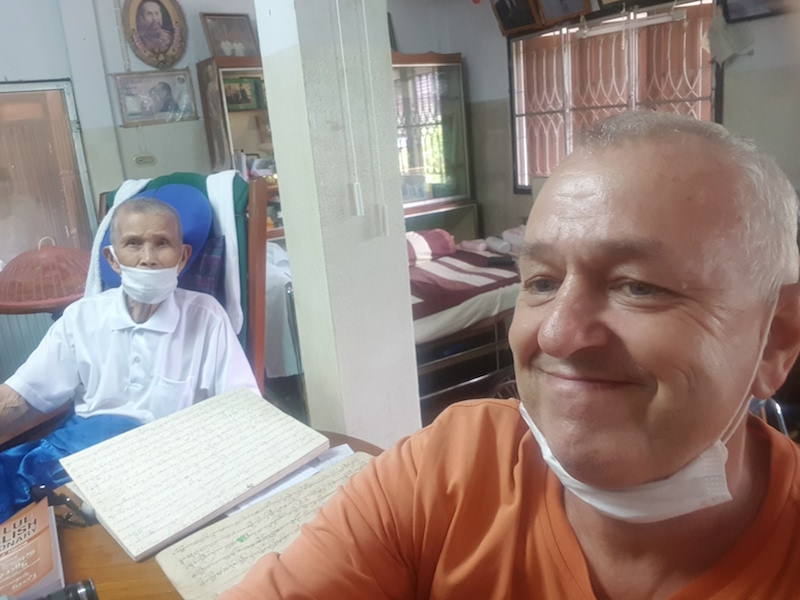 Me and my Tai Lue teacher Ajaan Sing in Chiang Kham 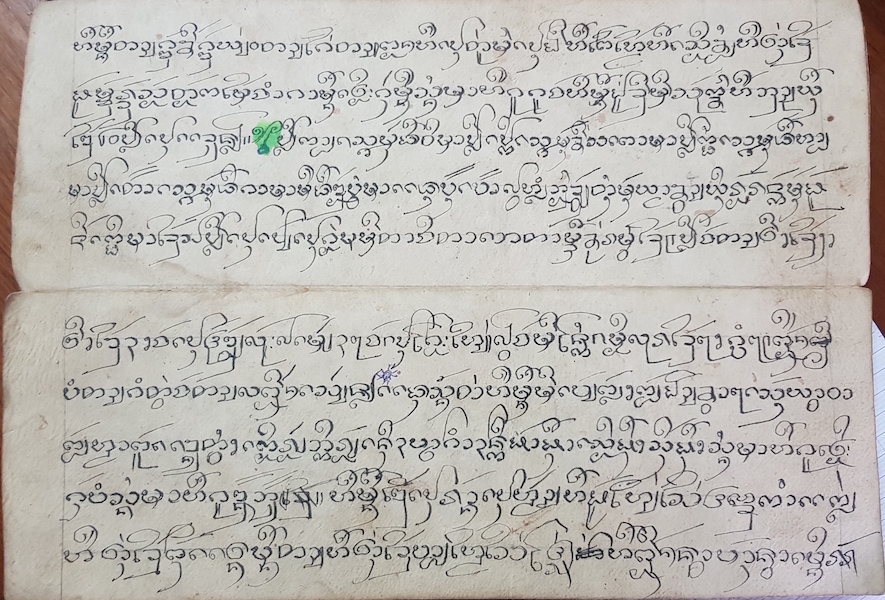 Two well-known Lue villages are Ban Luang Nua and Ban Luang Tai in Doi Saket district. We have been working since 2012 with Ban Luang Nua. During our bicycle ride we visit handicraft places in the village as well as the magnificent Sri Mung Muang Temple. We have followed the renovation of this temple over the years. In recent years Chinese tour groups have started to visit this temple.

In 2013 we organised a private Kantoke dinner in the village for groups. 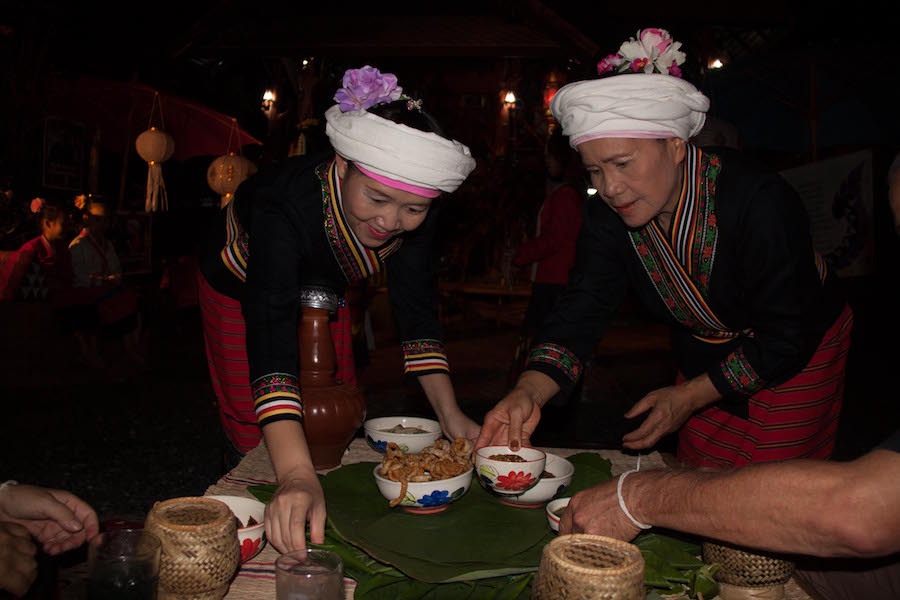 The only time you will see Tai Lue in their traditional dress is during festivals and ceremonies. Tai Lue usually take part in the Songkran and Loy Krathong parades. They are always present at events in Lamphun province such as Salak Yom and the Lamyai Festival.

The red, white or pink turban is characteristic. Both men and women wear a turban, a strip of textile that is wound around the head. They both wear a short jacket, that is usually blue, indigo or black. Men wear blue or black bell-bottomed trousers, women wear colourful sarongs.

The women are excellent weavers. In the past you would find weaving looms beneath most houses in a village, now only under a couple. The weavers use cotton, rarely silk. Some of their textiles are of such quality that they are exported to Bangkok and sometime abroad. In the tour Hiking and Biking in Chiang Mai we visit the Lue villages in Ban Thi.

The Tai Lue of Chiang Kham

Chiang Kham, Phayao province, is a major centre of Lu culture in North Thailand. Most tourists who visit Chiang Kham are local tourists coming for the Tai Lue temples, culture and textiles. Chiang Kham has a Tai Lue Cultural Center at Wat Yuan. Also very well known is the traditional House of Mae Saeng Da. Around Chiang Kham there are numerous villages.

Most likely the Tai Lue arrived in the Chiang Kham area between the end of the 18th century and middle of the 19th century. King Mongkut, Rama IV, initiated a repopulation campaign and brought them from Xishuangbanna district in Yunnan, Southern China. This was as late as 1853.

The most famous temple of Chiang Kham is Wat Nantaram. Ironically this is a Shan (Tai Yai) temple. Wat Nantaram is a stunningy beautiful temple but there are more wonderful temples to visit in Chiang Kham.

Wat Phra That Sob Waen is a Tai Lue temple in Chiang Kham. Outside the temple there is a small weaving center as well as an example of a typical Tai Lue house. Next to the temple there is a building that houses a museum. Here beautiful paintings are exhibited that tell the story of the migration of the Tai Lue people from Sipsongpanna. Next to every painting there is an explanation in Thai. 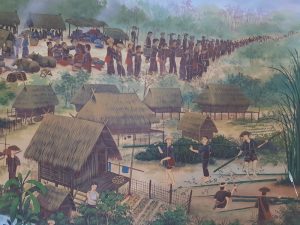 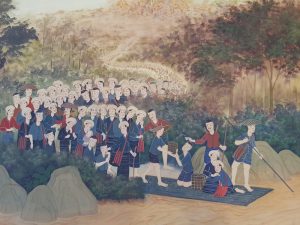 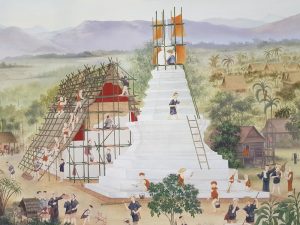 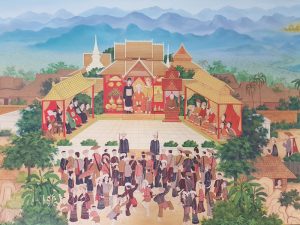 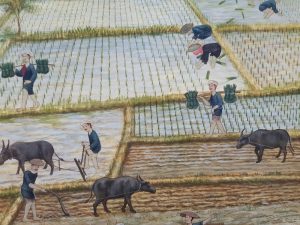 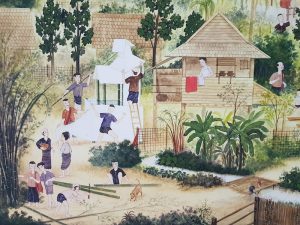 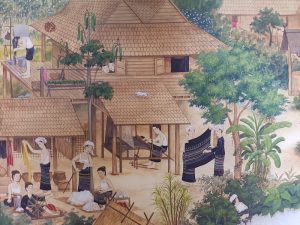 I have found a number of interesting sources during my research into the Tai Lue people.

Retired American anthropologist Michael Moerman appears on the website of UCLA as professor emeritus. Moerman studied anthropology at Yale University and received a grant from the Ford Foundation to do research in Tai Lue communities around Chiang Kham. He spent a year in a village called Ban Paed, just outside of Chiang Kham town, roughly from September 1960 until September 1961. He published at least one book called “A minority and its government: the Thai-Lue of North Thailand”.

Joachim Schliesinger wrote numerous books on ethnic minorities in South East Asia. Of particular interest are the two volumes of Tai Groups of Thailand. Volume is called “Introduction and Overview”, volume 2 “Profile of the Existing Group”. Both books were published by White Lotus, Bangkok, in 2001. I have not been able to find any information on the author yet. Volume 2 contains an article about the Tai Lue.

I met William Hanna at Payap University a couple of years ago. He gave me his book Dai Lue-English Dictionary (Chiang Mai, 2012). It is the only dictionary available as far as I know. 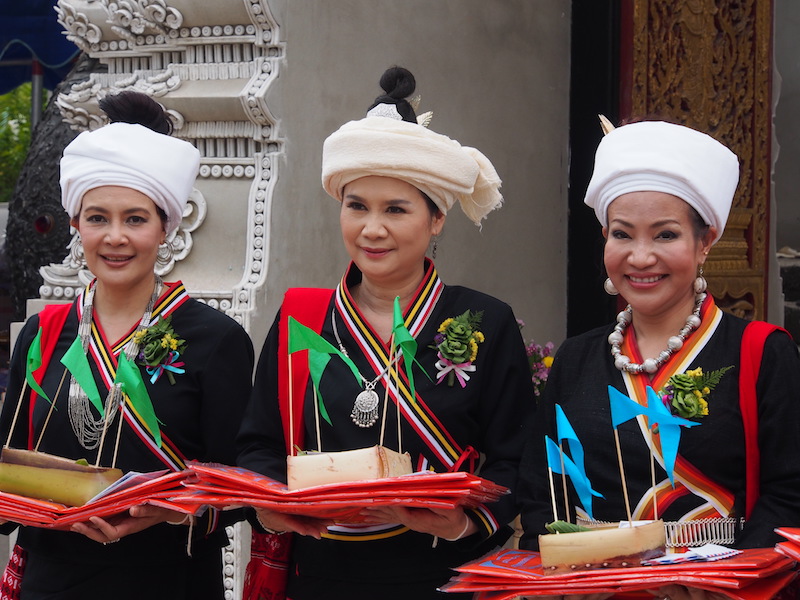