The Pa’O people and Wat Nantaram

The Pa’O people in Myanmar and Thailand

The Pa’O people are also known as Taungthu, Pa Oh, Pa’o Karen, Pa-O, Pa-U and Black Karen. Linguists consider them a subgroup of the Karen people because of their language. Many Pa’O are not aware of any connection to the Karen and consider themselves a unique, separate group 1

In Thailand they are also known as Tongsu or Toongsoo. According to Ethnologue there were 858,740 Pa’O people living in Shan State as we as in Mon State, Kayah State and Kayin State. According to a Wikipedia article there are as many as between 1,800,000 and 2,000,000 Pa’O living in Myanmar, the second biggest ethnic group in Shan State.

All these states are in the east of the country, bordering Thailand. Within the Pa’O group there are two dialects: Southern Pa’O of the people living in the Thaton area, Mon State, and the Northern Pa’O living around Taunggyi, the capital of Shan State. People who speak these dialects can understand each other. There seem to be at least 24 subgroups of the Pa’O people 2 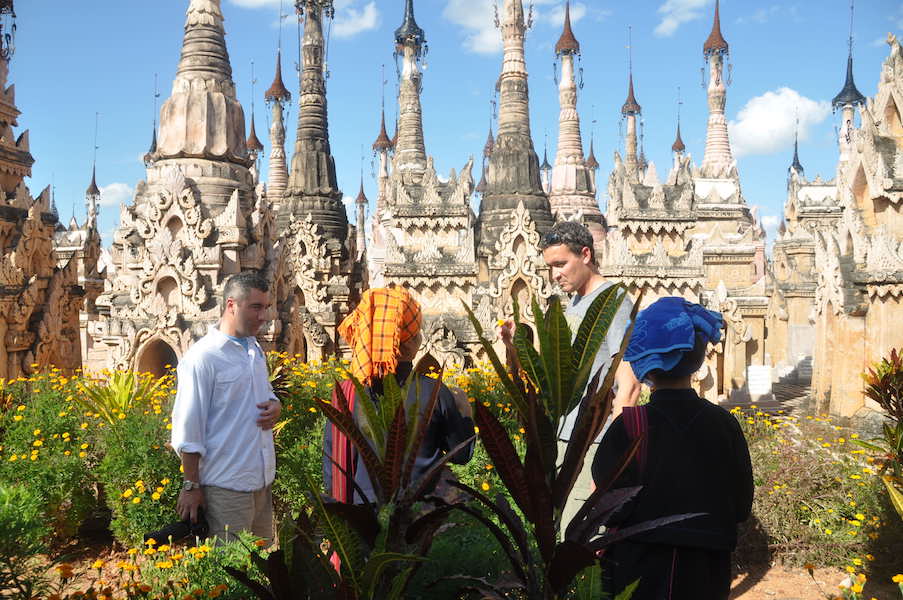 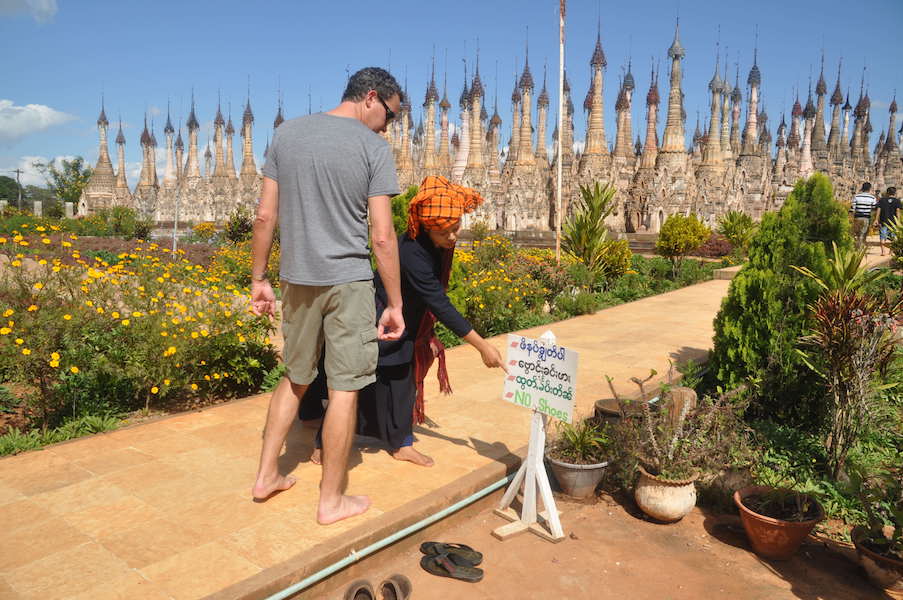 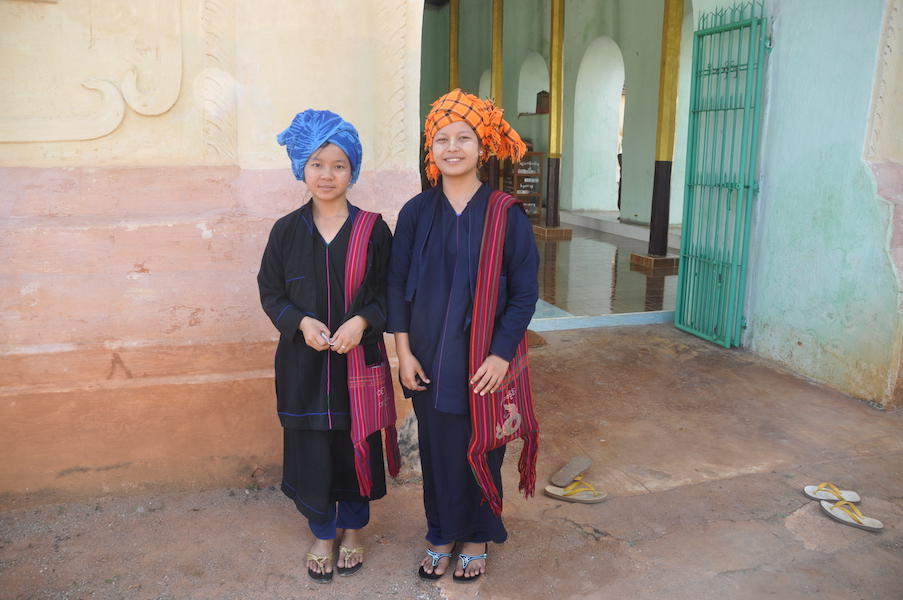 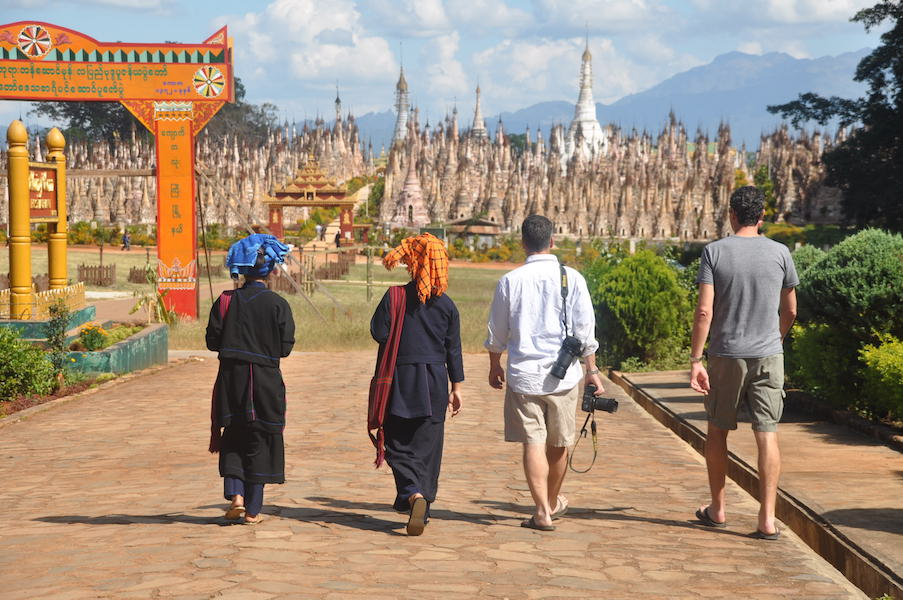 Visiting the Kakku Pagodas with the Pa’O people

During a visit to Myanmar in 2011 I met the Pa’o people for the first time. With friends I visited Shan State and we were staying in Kalaw, about 70 km from Taunggyi, the capital. We decided to visit the Kakku Pagodas, which is about 30 km from Taunggyi. Kakku has more than 2,000 stupas located close together. There is not much information about this archaeological site that might date back to the 3rd century BC. Some pagodas are from the 17th and 18th century, others were added later on.

The Kakku Pagodas are in the domain of the Pa’O people. I remember that we stopped at an office in Taunggyi and had to register. A guide from the Pa’O people was compulsory. A young trainee guide joined us. We had a wonderful time with our guides. Kakku is an amazing place. 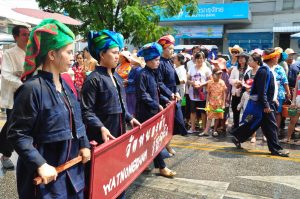 Few people are aware that Chiang Mai has a Pa’o presence. The Wat Nong Kham in Chiang Moi Street is a Pa’O temple. I noticed the Pa’O temple during the Songkran Festival in 2013. They participated in the great parade on April 13. Pa’O women wore traditional dress and carried a banner of Wat Nong Kham. Few tourists visit this temple that is interesting because it is so different from other temples in Chiang Mai. At the entrance there is a plaque that gives some information on the history of the temple. The temple’s title deed is dated 1584.The Lanna and Pa’o people founded the temple in 1837. The main buildings, the assembly hall and the chedi, date from that time. The Ubosot dates from 1902. We can include Wat Nong Kham in a customized version of this tour.

There are a number of Pa’O villages in Mae Hong Son Province. Research is under way. 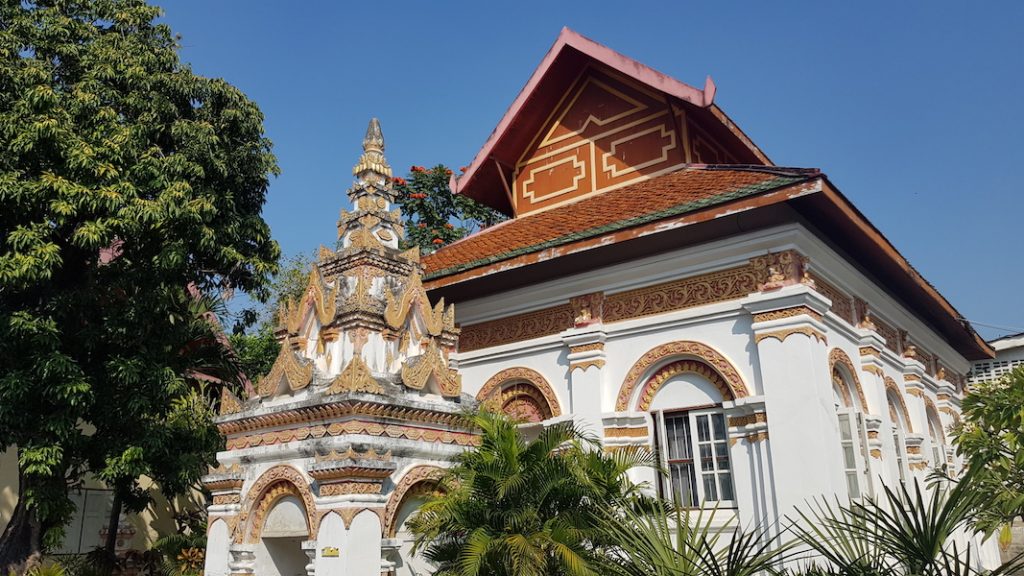 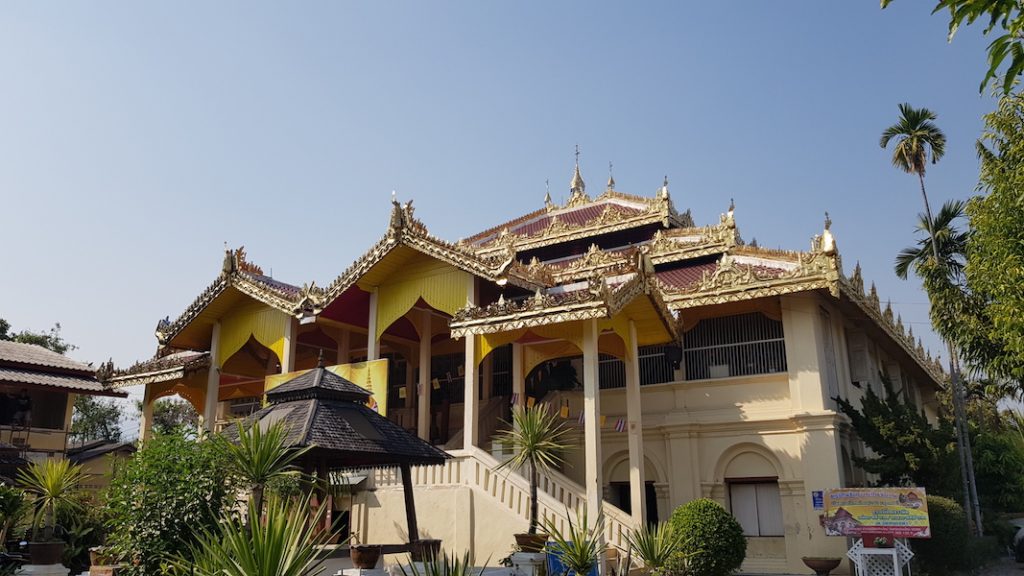 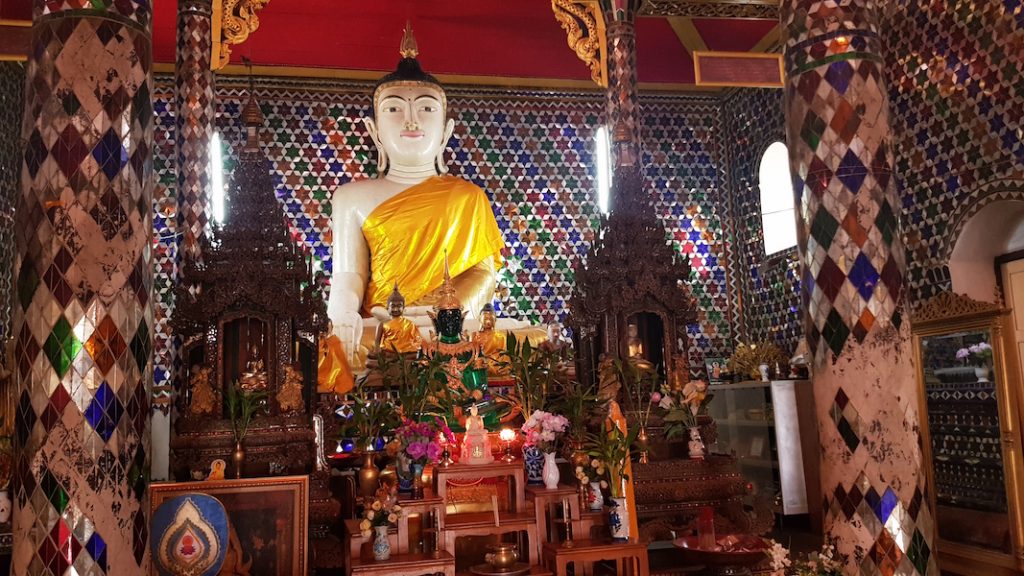 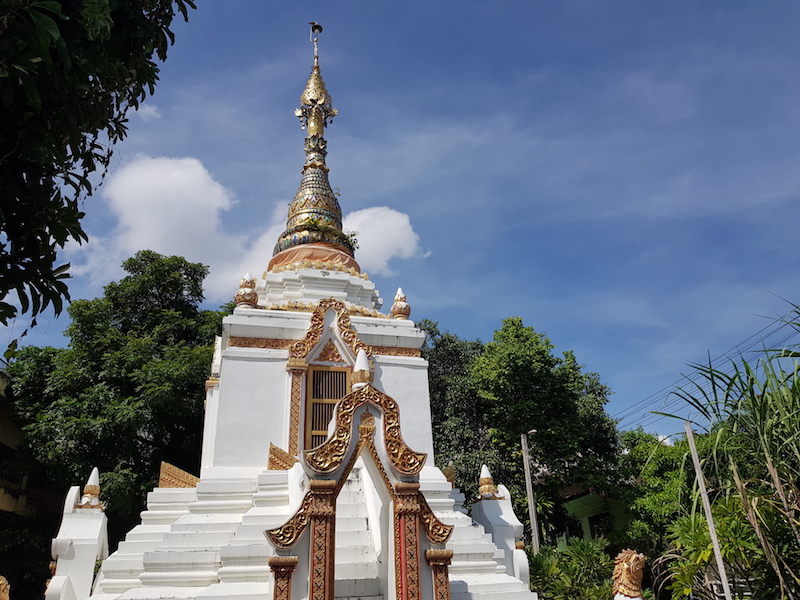 Recently I traveled to Chiang Kham district in Phayao province. Although Tai Lue temples dominate the town of Chiang Kham its most famous temple is Wat Nantaram, which is a Pa’O temple! It certainly looks very different from all other temples in and around Chiang Kham.

A Pa-O man called Takachongnanta (Oo) Wonganon (ตะก่าจองนันตา (อู๋) วงศ์อนันต์) was the main sponsor. He came from Taungyi in Southern Shan State in Burma to work for the British Bombay Burmah Trading Corporation in Lampang. This company was engaged in teak logging. Later on he and other Pa-O people moved to Chiang Kham as traders. According to information in the temple the migration of Pa-O and Shan to Lanna had already started after the British annexation of Upper Burma in 1885. In 1925 he sponsored the construction of Wat Nantaram for the Shan and Pa-O population of Chiang Kham. He hired a Burmese foreman from Lampang to take charge of the construction. The Buddha image hall is made of teakwood.

If you are interested in visiting Wat Nantaram we can customize the tour to Phrae and Nan.

Because Wat Nantaram is so beautiful I want to share these images: 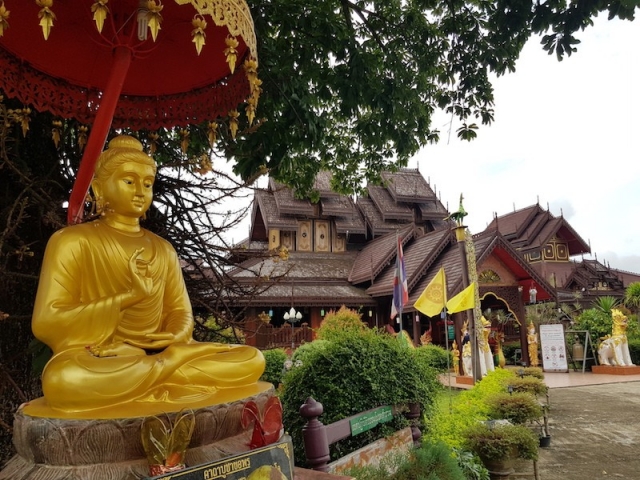 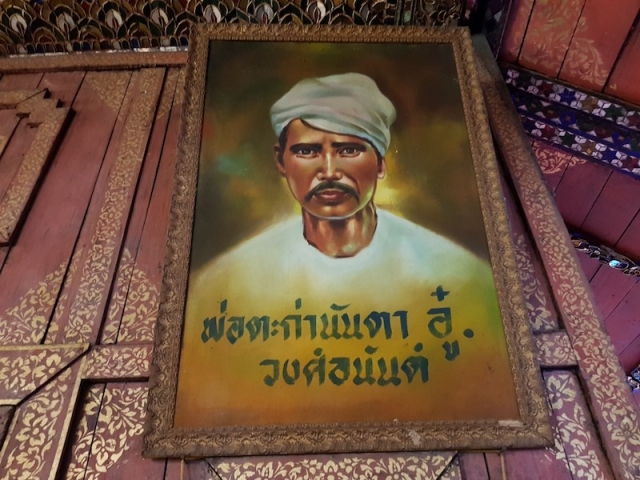 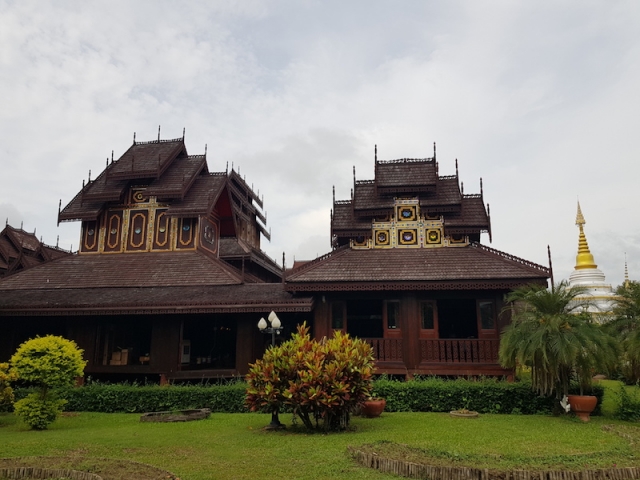 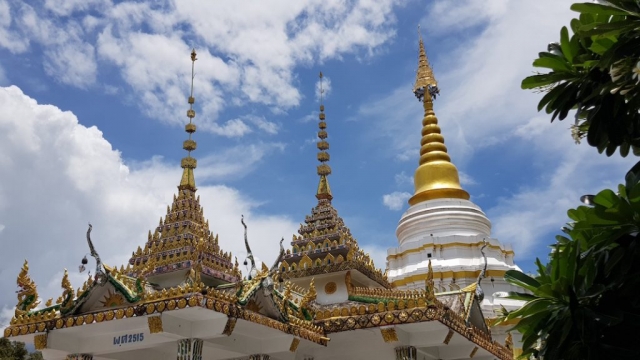 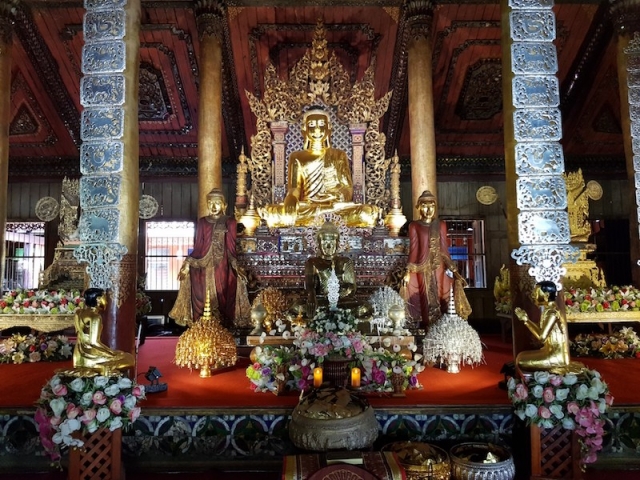 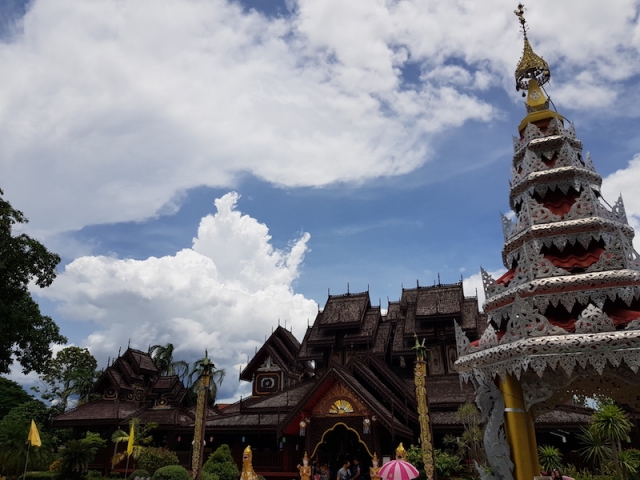