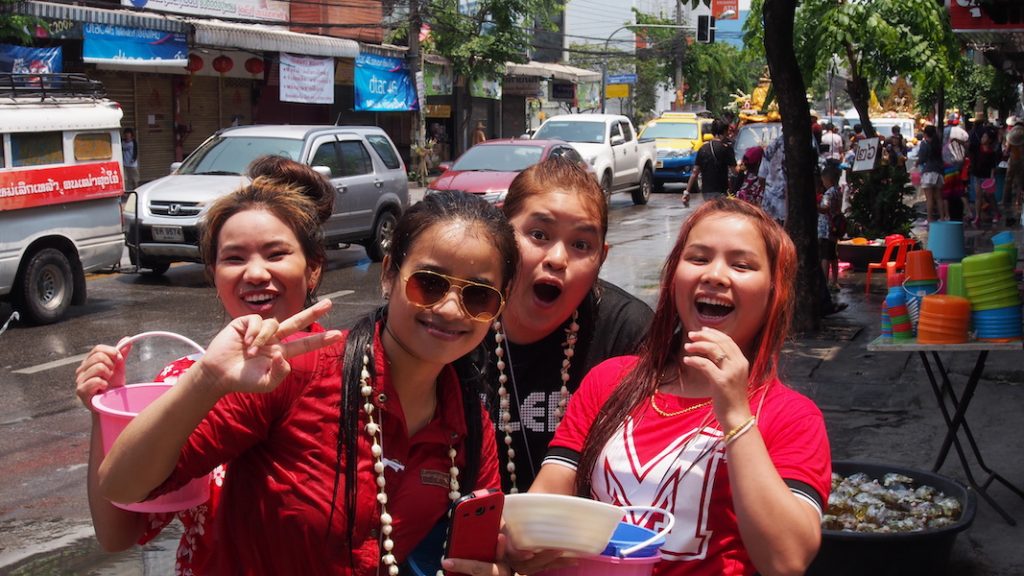 The Chiang Mai Songkran festival in Thailand is the traditional Buddhist New Year. April 13 is the official New Years Day. It is the biggest festival in the country. The word “Songkran” comes from the Sanskrit word saṃkrānti, which means transformation or change. Songkran is celebrated nationwide although the duration varies per city. The Chiang Mai Songkran Festival takes place from April 12 until 16. In some places, such as Pattaya, the festival lasts for a full week. In Songkhla in the south of Thailand, the Songkran festivities last only one day.

The Songkran Festival was traditionally a time to visit and pay respects to elders, including family members, friends, neighbours, and monks. People celebrating Songkran as a Buddhist festival may also go to a temple to pray and give food to monks. They may also cleanse Buddha images from household shrines as well as Buddha images at monasteries by gently pouring water mixed with a Thai fragrance over them. People believe this will bring good luck and prosperity for the New Year.

The Directory for Bangkok and Siam 1937-28 describes Songkran as follows: “Libations of water are poured to bathe the images of the Buddha, the Monks, the parents and the elders generally “…” In villages, this religious rite is apt to become a friendly combat of water throwing”.1

Briton Frank Kingsley Exell worked in Chiang Mai and Lampang as manager of the branches of the Siam Commercial Bank between 1933 and 1936. He could not appreciate the friendly combat of water throwing:

“I had been warned about the way the Laos* celebrated their New Year. What at one time had been a pleasing spectacle had now become an annual public nuisance, especially as far as the farang (foreigner) was concerned. How would you feel if you were walking down the street on New Year’s Day and someone suddenly chuckled a bucket of water over you?
The real significance of the Songkran or New Year Festival was completely lost in what amounted to nothing more than sheer hooliganism.” 2

Water Battles in the Ping River

On the second day, called Wan Nao, people would go to the market to buy things for the offerings on the third day. In the afternoon, people would go to the Ping River to collect sand. The took bowls and other containers with them. In April the river was very shallow so people could stand in the river and throw water at each other. After this, they would bring the sand to the temple and engage in building sandcastles. The third day is called Phaya Wan Day, the beginning of the New Year. People offer rice and pay respect to their ancestors, relatives or friends who have passed away. They sprinkle water on Buddha statues.

The afternoon is the time for paying respect to the elders. It is a time to remember the offences they have done and ask them for forgiveness and for them to have a good year from then on. The elders will tie sacred threads around the younger one’s wrist to show that they have accepted the respect or apologies and give them a blessing.

From the river to the moat

Well into the 1970s Songkran festivities and water battles took place in and around the Ping River. Long time resident Garnet Hoyes remembers: “It was common in the 70s. The river was always the focus of the festival then because of course, that’s where most of the flowing water was. Everyone gravitated to downtown and walked down Tha Pae, which was closed to traffic, throwing water on each other until one reached the river.”

The opening of the Mae Ngat Dam in 1985 would spell the end of Songkran water battles in the Ping River. After this more dams and weirs were constructed altering the water level in the dry season. Where once large islands would become visible in May, the Ping river now had a constant stable water level year-round. 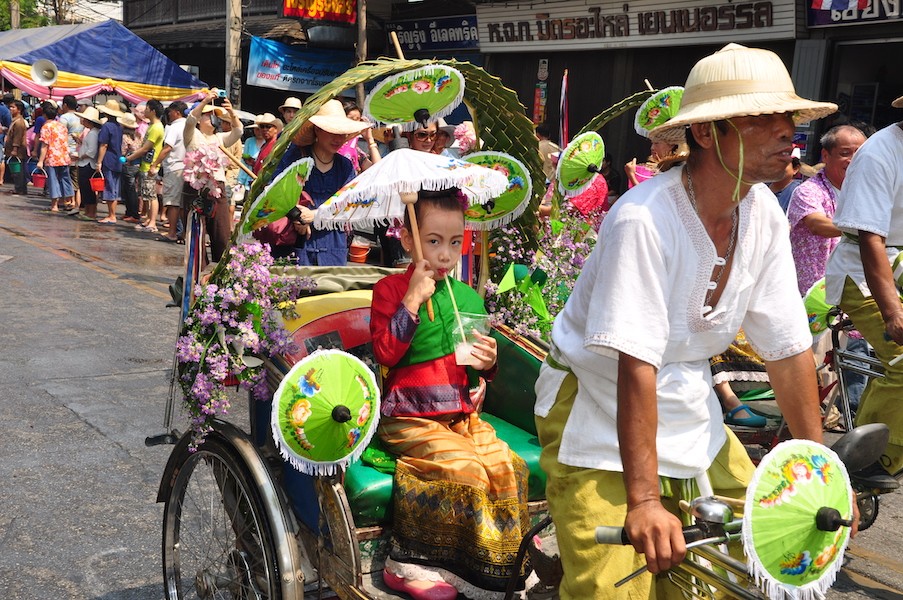 Mixed emotions about the Songkran Festival

The Songkran Festival raises opposite emotions from people. There are plenty of people, notably foreign residents, who hate the festival and occasionally flee the country for the duration of it. Some people are attributing the rowdy and undisciplined character of the festival to the influence of tourists. The late Roy Hudson wrote in 1971 his “Hudson’s Guide of Chiang Mai” the following:

“Songkran used to the time for paying respectful visits to senior members of the family when a little water from a silver bowl was sprinkled on the well-wishers as a token of blessing. The unrestricted throwing of water, which now occurs, is getting unruly. Gangs of high-spirited youths load drums of water on to trucks and career along the streets bailing out water in a reckless fashion, even using stirrup pumps and syringes to aid their efforts.”3

It proves that the traditional character of the festival had changed long before tourists started to arrive in Chiang Mai in numbers.

The history of the Songkran Festival in Chiang Mai

The first reference of the Songkran Holidays we found in the Directory for Bangkok and Siam from 1914. It mentions “These are four successive days occurring generally soon after the Official New Year, but sometimes a little before.”

Until 1941 April 13 was the official start of the New Year in Thailand.4 Other sources mention that the office New Year date was April 1 instead of April 13until Prime Minister Phibun changed it 5

Photographs of the 1950s and 1960s show a very different Songkran Festival than it has become in the last couple of decades. Boonserm Satrabhaya took most of the pictures of Songkran festivities in that period that are available online.

The festival lasted three days. April 13 is Songkran Day or Maha Songkran. On this day there would be a parade probably starting at Wat Phra Singh. People take the Setankhamani Buddha image, King Mangrai’s guardian, to the Burmese Wat Upakut on the corner of Thapae and Charoenprathet roads. The photographs Boonserm Satrabhaya took in the 1950s show large crowds in front of this temple. 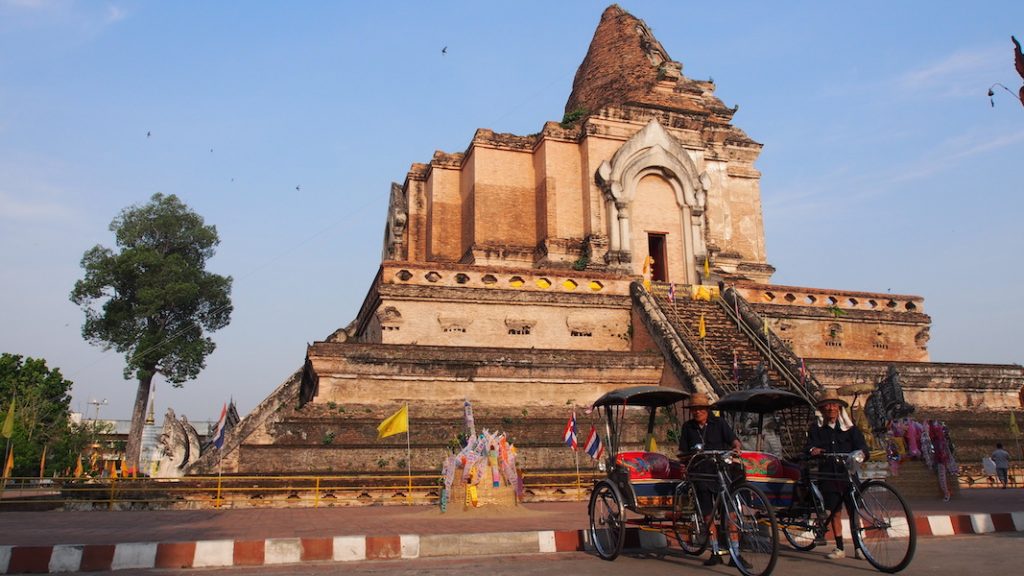 Changes to the Songkran Festival

Authorities made changes in the program of the Songkran festival in the 1960s. The main procession now takes place on April 13 and starts at the Railway Station. It is a massive parade that features Buddha images from the main temples of Chiang Mai, not only the Setankhamani Buddha image of Wat Phra Singh. The parade ends at this temple. During the parade, bystanders toss water at the participants and at the Buddha statues that are placed on ornately decorated floats, ritually ‘bathing’ the images.

There is now a second parade on April 15 that starts at Wat Phra Singh and ends near the railway station. This parade doesn’t feature floats and Buddha images. It is worth visiting temples during the festival and admire the sandcastles. Colourful flags decorate these temporary piles of sand.

The Songkran celebrations now take place around the city moat. Water battles with buckets and guns start in the morning and continue until sunset. Pickup trucks with revellers circle the moat. It is certainly not for everyone.

Over time the Songkran celebrations have become rowdier. The tradition of wishing a happy new year by tossing water on people has transformed into widespread water battles and throwing water at passers-by, people riding motorbikes, etc..