Loi Krathong (ลอยกระทง) is a festival that is celebrated in Thailand, Laos and some other places in Southeast Asia that have a Thai or Tai heritage. The Loy Krathong festival takes place around the 12th month in the traditional Thai lunar calendar. The dates of Loy Krathong change every year, which is always a source of confusion. Loy Krathong usually falls in November and attracts a considerable amount of tourists. 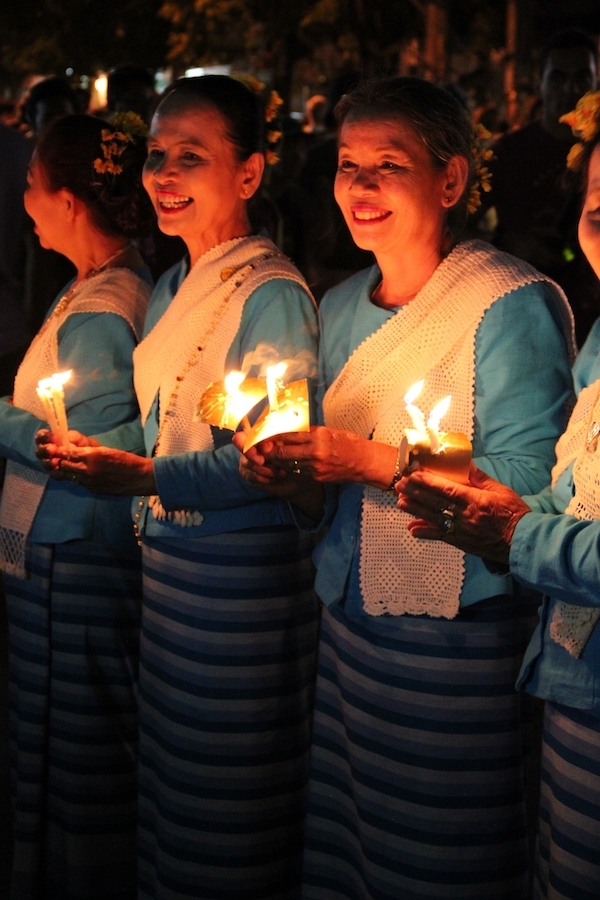 The Evolution of the festival in Chiang Mai

The Loy Krathong festival initially lasted only one day, the Full Moon day. Roy Hudson described it like this in his guidebook “Hudson’s guide for Chiang Mai and the North”: “The evening approaches and family groups make their way down to the river, moat or nearby stream”…”They will have made a Krathong, or bought one on the way.” At the water’s edge, they will lit the candles and float the Krathong. They push it gently and watch it glide away into the darkness, carrying with it all the wishes of the family for the following year. There were no parades and no Sky Lanterns.

Dates of the Loy Krathong Festival

In Chiang Mai, the festival coincided with the traditional Lanna lantern festival Yi Peng or Yee Peng Festival. This event lasts for three days. The first day is the lantern festival, the second day is the full moon day and the third day is now the day of the Loy Krathong parade. Loy Krathong is not an official public holiday in Thailand. Most activities take place after dark. In 2020 the dates should be October 29, 30 and 31. See here for the, yet unconfirmed, program of 2020. The Thai Tourist Authority is notoriously late with confirming the dates of Loy Krathong and the detailed program. 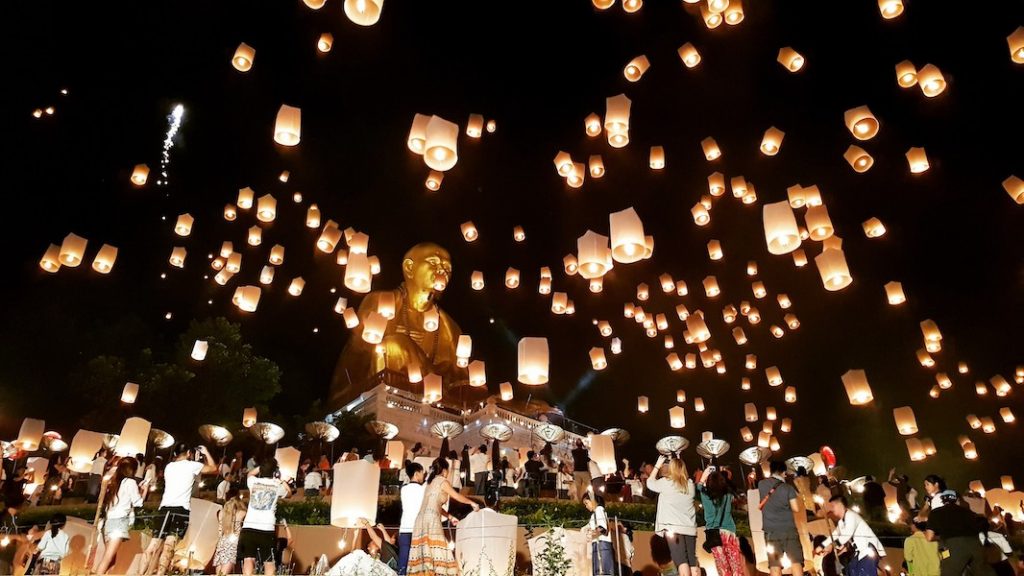 Problems with the Sky Lantern Release

In recent years authorities have limited time and place of the sky lantern release. The way they have communicated this to stakeholders and the general public has caused a lot of confusion and irritation. Nowadays the release of sky lanterns is only allowed on the 2nd and 3rd days of the festival between 1900 and 0100 (one hour after midnight). In 2020 this will probably be on October 30 and 31. Releasing of lanterns within and around the Chiang Mai International Airport, i.e. areas along the route for departure and landing of the planes, is not allowed.

There have been a growing amount of organized sky lantern releases. These take place usually outside of Chiang Mai. Around the colossal statue of Kruba Srivichai at Doi Ti, near Lamphun, there is an event. There are also events at Horizon Village, Doi Saket district, and near the Mae Jo University. It is hard to keep track of these events, but we can warmly recommend the Doi Ti event. The organized activities usually come with a dinner and a local market.

The history of the Loy Krathong Festival is somewhat obscure. Some people claim that the tradition of Loy Krathong originates in Sukhothai and was first organized by a court lady called Nopphamat. Others believe it was a Brahmanic festival that was adapted by Thai Buddhists to honour the Buddha. Anyway, the ritual of Loy Krathong is about paying respect to the Goddess of the Water showing gratitude for the use of water and ask for forgiveness in the ensuing pollution. People float a “Krathong” in the river to get rid of misfortune and bad things that happened in the past and asking for good luck in the future.

The release of sky lanterns was not a part of the original festival. Authorities have introduced the sky lanterns in the early 21st century.  Over the years the release of sky lanterns (โคมลอย) has become the most popular activity of the Yee Peng (Yi Peng) or Loy Krathong Festival. A Khom Loi is made from a thin fabric, such as rice paper, stretched over a bamboo or wireframe, to which a candle or fuel cell is attached. After you lit the fuel cell, the resulting hot air is trapped inside the lantern and creates enough lift for the khom loi to float into the sky.

Some people also call the festival the “Sky Lantern Festival”. Most photographs you will find if you Google “Loy Krathong Chiang Mai” show masses of sky lanterns in the night sky. It is a spectacular sight that attracts many tourists.

The Lantern release has become another significant source of confusion in recent years. Still, on many websites, you will find information about a mass lantern release at Mae Jo University. This event has not taken place for at least five years already.

Sky Lanterns along the Ping River

Most tourists flock to the Ping River between the Nakornping Bridge and the Iron Bridge to observe and release sky lanterns. In 2019 we witnessed large crowds of people on and around the Nawarat Bridge. It was a scary situation with people jam-packed trying to cross the bridge while others were lighting a fire to release lanterns. The police didn’t seem to be in control. It was a scenario for a stampede. People also have more and more criticized the release of sky lanterns because of pollution. 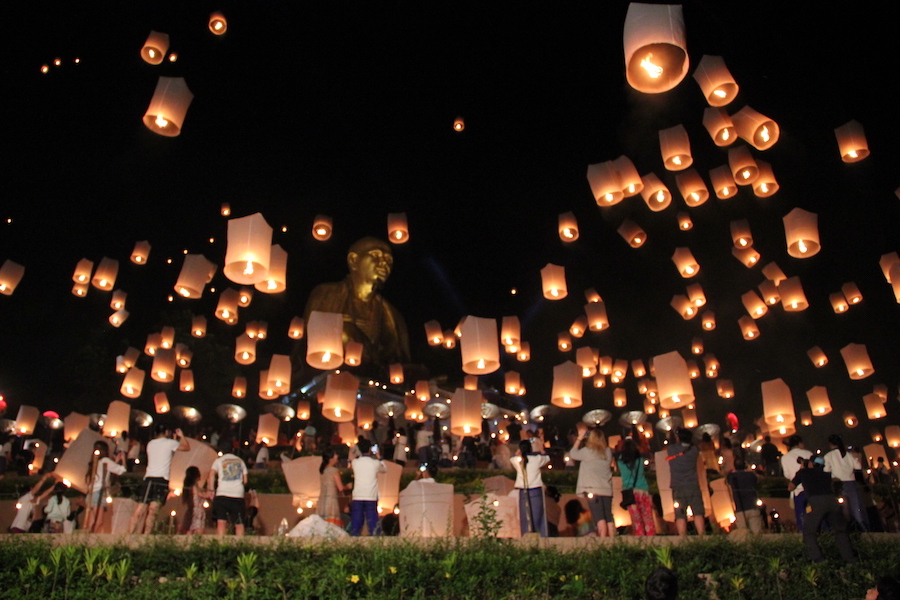